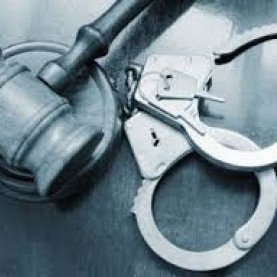 Jacob suffers the consequences of not being able to reverse his father's legacy of crime.

It wasn’t unusual to see my father being taken away from our house in handcuffs, but this time had a sense of permanence to it. There was a greater gravity in the air. The cops seemed more solemn, more official; the resounding clicks of metal on metal through the silence seemed more definite.

A media circus brewed outside our door. White vans lined our street. We were met by a mass of microphones and a gaggle of journalists jostling each other every time we left the house. Before being whisked away in a black car by security personnel, I always greeted reporters with a terse, albeit conventional, “no comment” since there really wasn’t a comment I could give. I knew nothing about my father’s most recent illicit activities. All I ever knew were the general details of his offences, which were never more than “petty crimes” committed to keep, as he liked to put it, “our boat afloat.”

This particular crime became front page news. In the media, there were pictures of my father which made him look like a cold-blooded terrorist and stories which connected him to drug lords, money launderers, bookies, strip joints and disreputable massage parlours. The one used most was taken for his first passport. In the photo, a gaunt, unshaven, hard-eyed youth stared coldly at the world through the camera lens.

Even though he was well-read my father was a man brought up and educated by the street. Still, every morning, dressed in a suit and tie, he’d kiss my mother goodbye in the kitchen before heading out to some undisclosed downtown location where he’d meet his “associates” to discuss “business.” What the nature of that business was we five children were bound by an unspoken code never to ask about. So, we lived our days pretending not to know what kind of businessman our father was, and, for the most part, could do so convincingly since the serenity of our suburban life set the backdrop for such denial.

When at home, my father gave his children a lot of attention and did the things most dads do. He mowed the lawn, took out the trash, fixed faucets, and drove us to our sports practices and games. In our house, it was my father who was the disciplinarian, the one who gave us guidance regarding right and wrong. “Always remain loyal to your friends at all costs,” he liked to say. “There’s no happy ending for a snitch.” Or, he’d tell us, “Never be sorry: in love, friendship or war.” We feared his disapproval not due to any physical threat he posed, but because we knew he’d seen a lot in his day and thought his experiences made him wise.

With my father in and out of prison, maybe it was inevitable I would fall in with an older suburban punk who liked to play “street.” I was in the back of a bus on my way to my part-time job as a dishwasher when Lenny, a notorious gang’s default leader, sat down beside me. I felt a rush of adrenaline needle through my body as his six-foot-four, two-hundred-and-sixty pound body flattened the cushion of the bench beside me. As the cushion exhaled, my body shook lightly. I’d never been within twenty feet of Lenny before. Now, with no more than six inches separating us, I could see the sun beaming through the bus’s back window glistening in the grease of his already-thinning, dirty blonde hair which he wore slicked back to better expose his pock-marked, zit-scarred face and the skull and crossbones earring he wore in his left ear. The smell of leather and weed mixed with alcohol and tobacco coming off of him surprisingly calmed my nerves. “Hey, you’re Hank Bozak’s kid, aren’t you?” I nodded. “Meet me outside the gym doors after school tomorrow. I’ve got something for you,” he said. Then, he got up and was off the bus at the next stop.

After school the next day, I waited for Lenny outside the gym doors like he said. Ten minutes later, Lenny, appearing stealthily from around a corner, slowly pushed me into the alcove. His voice was hushed, but business-like. “Your father wanted me to give this to you.” And, with that, he flattened a creased envelope against my chest and took off.

It was a letter from my father. Since his arrest, my mind kept revisiting the way my father sheepishly shuffled toward our front door in handcuffs, his head lower than usual. He didn’t protest his innocence or look anyone in the eye. (I wasn’t sure if this was a testament to his guilt or if he was playing guilty to cover for someone else.)

Alone in the alcove, I read his letter, a prelude to the first of many times I would visit him in prison.

I keep bumping into myself in here; I can’t get out of my own way. There’s no future in prison, only now, this minute, and the past keeps haunting me. One thing I’ve learned (if I’ve learned anything from this mess) is that it’s better to confront the past head on because it’s going to find me no matter where I am, and it can’t be meaningful unless I share its teachings with my children. The street shaped me, Jacob. It whittled away my sense of security; it dug in and scraped off my sense of empathy and justice; it cut out my throat so I had to learn to speak in a new voice; it gave me new eyes and sliced up my soul. It’s left scars. I’ve made enemies.

From its beginning, my life’s been about survival. Caring for my mother was never easy. She was always anxious and depressed and couldn’t hold down a job. That’s why I quit school and took to the streets. The street was all I knew, the only place where I had some currency. It’s also the place where I accumulated a lot of financial and personal debt. It got so too many people were after me, and I had to do what I did … to survive. Promise me you’ll be more than just a survivor, Jacob. Be a contributor to something more than just your continued existence. Reverse your old man’s legacy by being and doing something good.

After reading his letter, I couldn’t stop thinking about how you can be two different people at once and how you can give advice to others you can’t accept for yourself. I also thought it curious how fiercely you can love someone you also fiercely hate.

In the weeks following my father’s arrest, my mother wasn’t herself. She stumbled around the house as if she were perpetually light-headed and lay down in her darkened bedroom for most of the day. I think she knew that, even if she were able to find the strength to venture outside the house, finding work would be difficult given her association with my father. So, I decided to take matters into my own hands.

The next time I met Lenny outside the gym doors, he had this to say to me, “Always pick a place that’s hidden, where no one can see you from a distance. Never hold the stuff out front; always keep it in your palm like this and hold it close to your thigh … and, no matter where you are, always look out for plain clothes cops and unmarked cars. Their cars are usually brown or blue … and domestic. I’ll meet you back here in one week to collect.” Then, he pressed the biggest bag of weed I’d ever seen into my chest and was gone.

On my first deal, I was too nervous to remember anything Lenny told me. While I was selling a dime bag to a kid in our high school parking lot between classes, a cop in a t-shirt and jeans came out of nowhere, grabbed me by the wrist, swung my arm behind my back and had the cuffs on me before I knew what was happening. He let the other kid run.

As I heard the resounding clicks of metal on metal behind my back and felt the pinch around my wrists, my father’s words, which played like a mantra in my mind since my first meeting with Lenny, were cued: Promise me you’ll be more than just a survivor, Jacob. … Reverse your old man’s legacy by being and doing something good.

In the back of the cop car, I couldn’t stop thinking about how you can be two different people at once, how you can give advice to yourself you don’t accept, and I also thought it curious how you can fiercely love and fiercely hate yourself at the same time.