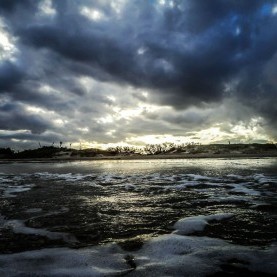 Her life started out so simple, so happy, so innocent. She wonders how it ever got like this.

She's six years old and she sits on her daddy's lap, her face sticky with cherry popsicle residue. They watch Scooby-Doo together, and she tries to guess who wears the rubber masks before the gang can. Mommy bakes cakes on her days off and lets her lick the batter from the bowl, and she always wears a smile like a comfortable piece of clothing. In the fall, she jumps in leaf piles gathered on the large hill behind her house, and in the winter she scampers up the same with her daddy to the bus stop, carrying her shiny new pencil case and her sky blue homework folder, shouting and waving at her friends. At school, her teacher gives her a gold star for being such a good listener.

Third grade arrives and she's too big to sit on her dad's lap. The remains of the popsicles she eats are neatly wiped from her chin and cheeks with coarse paper napkins. Her dad comes home one day with a pink slip and a worried face, and her mom spends more time at the office to compensate. She discovers that she'd rather go hungry than eat the school lunch. In the fall, she plays tag under the crisp autumn sun, and in the winter she and her friends hurry up the hill with their sleds, eager to begin the exhilarating trip back down again. At school, her teacher praises her artwork and pins it up on the blackboard.

Sixth grade passes in a whirl of Disney movies and dystopian novels. Her father watches football every evening on ESPN and drinks amber liquid that hangs on his breath even hours after he's drained the bottle. When he's not around, she takes a small sip out of one of the narrow-necked vessels, and her tastebuds smart at the powerful jolt. Her mother works late into the evening and frozen dinners become a ritual. In the fall, she browses the library with her friends, and in the winter she walks up the hill to meet the bus, her most recent English essay stowed in her book bag. Her teacher gives her a stern look for talking too much and a B on the paper.

She's about to be a freshman in high school, and the boy with the dark blue eyes she's often admired has just asked her out for the first time. They spend the evening at his house eating popcorn and watching Donnie Darko. Her father rarely gets out of bed anymore, and her mother doesn't return from work until after she's gone to sleep. In the mornings, she pours herself cold cereal, and in the evenings she rummages in the fridge for sandwich supplies. Sometimes, when her father does rise and her mother does come home early, she hears them scream at each other from the quiet safety of her room. In the fall, the boy with the dark blue eyes kisses her, and in the winter she trudges up the hill, her bag heavy with the textbooks she didn't have time to read through. Her old friends don't sit with her at lunch anymore, and so she sits next to the boy with the dark blue eyes. He offers her a cigarette. Her teacher sends her out in the hall for talking back, and marks her French idiom exam with a harsh red D.

She's seventeen years old and senior year is right around the corner. One Friday night, she sneaks into the movie theater with some friends and watches a film that starts with the warning Mature content; viewer discretion advised. They sit in the back row and pass around a bottle concealed in a brown paper sack, not daring to smoke yet because someone might complain and get them kicked out. Back at home, her father is no longer sitting in his armchair. He left the house thirteen months ago. She's been counting. Her mother brings home a new man for her to meet every other week, it seems. She doesn't like any of them. She tells the boy with the dark blue eyes this, and he hands her a drink. Later that night, when he makes a suggestion with whiskey on his breath, she tells him no. His eyes grow even darker, and when he tries to grab her he rips the front of her blouse. She runs from his house, chased by a stream of profanity. In the fall, he's got his arm around a new girl, and in the winter the hill she drags herself up is just another one of the mountains she's not sure she can climb. She no longer cares what grade her teacher gives her.

Twenty-two, on the tail end of her college days. There's no time for television; she spends her evenings studying at the coffee shop on the corner. Not that it matters. She hasn't been focused all year long. Earlier in the month, she received the news that her father was struck and killed by a drunk driver while crossing the street. Now the dress she wore at the funeral still lies on her floor. She's too tired to hang it up. Any dates she picks up can't stand her for longer than two weeks. She retreats into her apartment and refuses to emerge. She stops brushing her hair, quits getting dressed. She no longer feels the desire to get out of bed, much less go to class. Her friends quit coming to check up on her. Fall and winter are too far away for her to wait for, so in the spring she scrounges up a length of rope, and in the summer she ties it to the loop in the light fixture. She climbs on to the table, her thoughts returning to the long-ago hill. Bitterly, she wonders what grade her paper on evolution received.

I found your piece highly engaging. There was a great build up to the dramatic ending, and even though you didn't explicitly state what was happening you revealed it in such a beautiful and subtle way. You should be commended for your amazing piece.

I loved how you presented the story like a cassette tape, it was intriguing and instantly got my attention. The character was portrayed very well and I could easily empathize with her. The way the atmosphere of the story darkened with each paragraph made me sit up and anticipate each new scenario.
Tweets by @thepenfactor