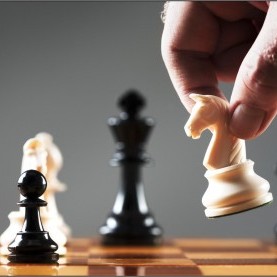 A pair of brothers play chess.

Two men sat across the other in a quaint little coffee shop. Cars whizzed by them on the busy road of New York beside the cafe. A chess set sat on the table between the two, the pieces in varying positions on the board.

Two forts stood among the formidable sandstorm raging around them. The battlefield between them littered with bodies and abandoned weaponry.

"Let's continue, shall we?" One of the men requested jovially. He wore a white crisp suit with a light blue tie that complemented his sky blue eyes. His gelled blonde hair swept to the side artistically. As he spoke, he set down his cup of Earl Grey tea with a delicate clink.

"Of course," his companion answered. This man was as different to the white-clad man as Night was to Day. He wore a rumpled black cardigan that was frayed at the ends and covered in dark brown stains. His black slacks did nothing to improve his appearance, as was his shaggy ebony black hair that could only be described as a bird's nest. His coal-coloured eyes gave no emotion, even as he drank deeply from his mug of black coffee and set it down on the table with less grace than his counterpart.

"I-I think they're starting to move again!" the slightly panicked tone of a young man alerted the others in the fort.

"Damn it- Everybody get ready, we have trained for this our entire lives. We are not going down without a fight! Do you hear me?!"

Two pairs of eyes redirected to the chess set between them. The board was clearly dominated by white pieces, having not lost any pieces except for three pawns and a bishop. The black pieces were only left with two measly pawns, a rook and the King.

The sandstorm died down, leaving the battlefield clear. Most of the scattered bodies donned black indifferent military gear. A few bodies were donned in beige and white outfits, stained red.

The blonde man reached forward suddenly, moving his black rook forward in an unflinching move. The dark-haired man watched on, unmoving. A minute passed. The ragged dark sleeves brushed across the board as a tanned hand picked up a stark white bishop and moved it toward the black rook, almost hesitantly.

"The soldiers are advancing!"

The black uniforms moving like ants across the desert battlefield drew closer.

Another hand crept by, removing the black piece in an almost lovingly caress, placing it gently among the other fallen black pieces standing silently by the board, gazing as their comrades fell one by one. The few white pieces lay carelessly beside them, without a thought of how they were dumped there.

"Remember, men. Even if they were our enemies, all lives must be respected and cherished."

"Ah, must you always be this sentimental, dear Brother?" the blonde questioned, his jovial tone still in place, seemingly undeterred by his rook's downfall.

His brother remained silent, his icy stare urging the other to keep playing the game. The blonde chuckled, unperturbed by the man's frosty look. Once again, he reached forward, grasping a pathetic pawn in his pale hand and redirecting it to the front lines. "The end is nearing," he commented, head tilted to the side, as if contemplating something.

"Soldier, what are you doing?! Get back into position immediately!"

The black-clad man ignored his order, moving on resiliently.

The ebony-haired man ignored him, eyes fixed on the board before him. Slowly, as if it pained him, he moved a white pawn to stand in front of a knight that was in harm's way of the pawn the blonde just moved. He sat back down, already feeling remorse for his move. The blonde immediately pounced, using his black pawn to knock down the white pawn then flippantly deposited it with the other white fallen pieces. His brother frowned at the action, but said nothing.

A cry was swept away by the lingering gale of the sandstorm. Red spilled onto white. Black moved on.

"The end is always the best part. Don't you think, Brother dear?" the man again attempted to bring his brother into the one-sided conversation, an easy-going smile alight on his face.

"...The end is what we strive for, Little One," he finally deigned an answer to the blonde's question, a hard glint in his eyes. With a troubled sigh, the dark-clad man moved his white bishop, taking the black pawn's place. Again, the black piece was put gently with the others.

"I'm sorry." A whisper followed by a gun shot.

A black body fell to the ground.

"I am not Little anymore, Brother," the blonde groused, pouting a little, promptly deciding to move his last pawn directly to the pathway of a white rook. He looked on, anticipating the sure move his brother would make.

"You will always be Little to me," the shaggy-haired man said, moving his rook - predictably - to fall the little pawn, which was stood in its place among the other fallen pieces. "When you end your childish games, then I will reconsider."

A turret fired. Its shot echoed across the battlefield. Another body went down.

"Doesn't matter," the blonde sniffed petulantly, "I don't care about what you think of me." He moved his only piece - the black King - up a square. "You just don't know how to have fun..."

"Soldiers. My friends. I have failed you. I'm sorry."

"So young. Still so much to learn," the blonde's brother murmured, as if he was talking to himself. He absently drained his coffee mug, eyes never leaving the board. With a steady hand, he reached forward, picked up the white Queen - and placed it right in front of the black King. "Checkmate."

The blonde blinked. Then laughed. "A good game, Brother!" he exclaimed, smile returning to his face.

"A good game, brother," the other man repeated, standing up wearily. He looked down at the chess set. All but the black King was left of the black pieces. His white pieces a blatant display of victory on the board. He looked towards the fallen pieces sadly, before packing the set.

"Until next time," the blonde smiled, sticking out his hand.

"Until next time," the dark-haired man shook the offered hand.

Great at getting straight to business, not much patter at the beginning to diffuse the strength of the opening. A little bit confusing way to talk about the characters. I get what you were trying to do by not naming the two brothers but the writing got bogged down by using different descriptors to refer to who you meant. Try using a short epithet that readers can use to identify a character.
Tweets by @thepenfactor