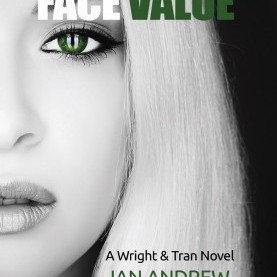 Entry for WA Comp: ​Kara Wright and Tien Tran, combat veterans of an elite intelligence unit, now make their living as Private Investigators. Often working the mundane, just occasionally they get to use all their former training. When siblings Zoe and Michael Sterling insist that their middle-aged parents have gone missing, Kara and Tien are at first sceptical and then quickly intrigued; the father, ex-intelligence analyst Chris Sterling, appears to be involved with an elusive Russian thug. Using less than orthodox methods and the services of ex-colleagues with highly specialised talents, Wright & Tran take on the case. But the truth they uncover is far from simple and will shake Zoe and Michael as much as it will challenge Tien and anger Kara. An anger she can ill afford for she is being hunted by others for the killing of a street predator who chose the wrong prey. The only constant in this darkening world is that nothing and no one can be taken at face value.

It wasn’t the prettiest place to die. But then again, where is? She was taking a shortcut through unfamiliar territory. He was running an illegal errand on ground he called his own. Neither would have wanted the street, with its vandalised lights and graffiti-covered hoardings, to be their final view of life. But we don’t often get what we want.

This is good writing. From the outset I was hooked. I thought she was the one who was going to die - so glad she didn't. The action was well written and I could follow it like a film in my mind. Very well done. First class opening to a novel. Can't wait to read more.

This is a wonderful opening chapter, filled with intrigue and suspense. I never would have guessed that that Kara Wright would annihilate her male counterpart. This makes for a refreshing and unpredictable read, which is every bookworm's paradise. I think you are a talented writer - stylistically your writing is unique and economical. There's no chance of encountering cliches with you (every reader's worst fear). Well done!
Tweets by @thepenfactor