A Time To Every Purpose - Chapter 1 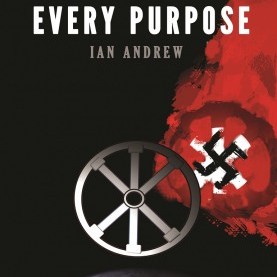 A Time To Every Purpose - Chapter 1

What if Jesus hadn't been crucified? For two thousand years the religions of earth have been united in peace and harmony, and humanity enveloped in Nirvana. But in the early decades of the twentieth century, natural disasters, famine, disease and economic collapse bring catastrophe and a fledgling Nazi Party sweeps to power. Now, almost a century later, their brutal persecution of millions is a never-ending holocaust. Yet a few heroes remain. Leigh Wilson, inventor of one of the most significant discoveries in human history and a leading member of the Reich’s Technical Division has kept a secret all her life. But plunged into the aftermath of the cold-blooded murder of a Nazi official, she is forced to make a choice. Will she use her power to reset history? Will she destroy what she loves to save what she can only imagine? A Time to Every Purpose is a thrilling mix of science and action, good versus evil, and the eternal question all humans face: Is this my time to act?

She stood on the Mall opposite the entrance to Horse Guards and gazed along the flag-lined boulevard towards the Palace. A soft spring breeze gently billowed and caressed its way down the two parallel lines of red, white and black. The folds of the nearest flag shook out and the Swastika unfurled against the turquoise blue of a London sky.
She looked away from the symbol of the Reich as the ForeFone buzzed on her arm. The unknown number icon flashed on the screen but she reached up to her earpiece and clicked the connect toggle anyway.

“Doctor Wilson, it’s Heinrich Steinmann, I’m so sorry to disturb you on your weekend.” The language was English, the accent clipped, precise and stereotypical of an Oxbridge education. Yet just in his vowels there was the trace of mid-Germanic origins. Leigh’s senses sharpened. Mid-Germanic yet educated at the best universities in England normally indicated a particular type of Party operative. That alone would have made her cautious but the fact that she didn’t know who Heinrich Steinmann was added to her sense of foreboding. Her mobile number was not in any directory listing due to her status as a Senior Government Science Officer yet here was this stranger calling her.

“Thank you Doctor Wilson but English will be fine and yes, I’m fine too, thank you for asking. I was wondering where you were at present?”

“I’m sorry, but would you mind telling me who you are before I tell you where I am?”

“Ah, my apologies, I forgot. You’ve been on leave. I’m Major Lohse’s replacement.”

“His replacement? I didn’t know he was leaving.”

There was a momentary pause and when Steinmann spoke again his accent had softened, subtly. “No. That’s right. It was rather sudden. A family emergency in the Homeland. It would appear his eldest boy was involved in some... mmm, unpleasantness, at the Munich Institute. We do all trust the Major will return to duty swiftly but,” he paused a beat before continuing, “as you can imagine, it will depend on the outcome of enquiries. Yes?”

“Yes, I see,” and she did, clearly. Although she had no idea what the unpleasantness referred to was, it didn’t matter. A Major in the Reich Security Directorate did not, could not, have members of their family being anything less than model citizens. Depending on what young Lohse had gotten himself into, Lohse senior was facing a halt to his career, perhaps a demotion or two or... She didn’t finish the thought. “So is it Major Steinmann?” Leigh asked.

“Well, no. Formally I suppose I am Colonel Steinmann of the Allgemeine-SS, Special Investigations and Security Directorate. But please call me Heinrich, we shall be working together after all and I find formality, so, um, formal.” Heinrich laughed lightly at his own humour.

Leigh felt a stab of adrenaline in her stomach. Her breathing had quickened and she could feel sweat running down the back of her neck. The temperature was a seasonal fifteen degrees Celsius, the normal average for London in May, yet her whole body convulsed in small shakes more associated with a freezing winter wind. She struggled for control of her voice.

“Oh!” She was high by an octave. She covered her mouth and coughed. Her mind screamed at her to get a grip on herself. She coughed again. “Excuse me Heinrich, my apologies. So, what can I do for you?” She knew he would have expected his title to get a reaction and she was annoyed at herself for allowing it to show so obviously. She imagined him smiling at her discomfort as he spoke again.

“As I said, I was just wondering where you were?” He asked plainly and without offering any explanation as to why he wished to know.

“In the Mall, opposite Horse Guards, I was going for a walk,” she answered quickly. Her mind shouted so loudly to calm down she almost flinched from the noise in her head. “Why do you ask?” she managed to say a little slower and a lot more calmly than she felt.

“Excellent, I’m so pleased to have caught you nearby. My apologies for interrupting your walk, but I was wondering if you could come into work? Just for a short while. We have a little query with regard to the experiment Professor Faber has left running and I’m afraid he isn’t available. I realise my request is terribly inconvenient on a Sunday evening but I would appreciate your input.” Heinrich spoke in such a non-confrontational, pleasant and charming way that anyone with no knowledge of his professional specialisation would have felt flattered to be asked.

Leigh knew it was all just for effect. She knew from his title exactly what Heinrich Steinmann was and no one, not even the Chiefs of Staff of the Reich forces, would have turned down his ‘request’ for ‘input’.

“Of course,” she heard herself say. “I can be there in half an hour.”

“Oh no, please. Please allow me to have a car pick you up. Just stay where you are and we’ll save you the walk. I’ll see you shortly Doctor Wilson.”

The call had already disconnected but she distractedly pressed the end call button on the wireless earpiece. Continuing to stare at the Fone’s blank screen, she played out the scenarios in her head. There was nowhere to run to and nothing to do but wait for the car. If they had finally caught up to her then the best she could hope for was a swift processing. At worst, if they thought she had information on others, then her next seventy-two hours would not be so pleasant. She reached inside the concealed double-lined pocket in her light jacket and fingered the small gelatine capsule that nestled there. She would wait for the car. It wouldn’t take long to figure out what was going to happen.
If they travelled east to her work in the Todt Laboratories then maybe things were not as bad as she feared. Although there was a newly built detention facility in the compound she would know straight away if they headed for it. She would stay alert to the possibilities that Colonel Steinmann was playing a game with her, but she would wait. But if they took her north-west to the Harrow Holding Centre, then there would be nothing to wait for.

Leigh smiled. For her thirty-five years of life she had worked her way through the system, gained academic honours and achieved a senior government role. She was a leading scientist on the most far-reaching scientific experiment ever undertaken in the eighty years of the Greater Germanic Reich, or arguably in the whole history of humanity. She had run a good race. If it ended now, well that was what God intended. If not, she would continue her work to undo everything; in His name.

I can guess from all of this the possible time travelling spin on the story, but I still want to know more. Very good job.

A really good read would love to the whole book.
Tweets by @thepenfactor