The Sleepwalker: Chapter One 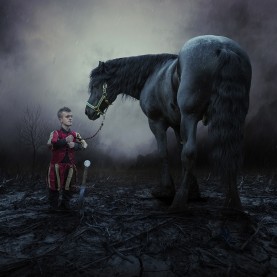 The Sleepwalker: Chapter One

Charlotte Dean, a logical young woman from a well-off family, has always been prone to sleepwalking which has put her life at risk and made her doubt her sanity. At her wits end, she heads to a fortune teller, who starts her down a path into another perilous world...

It's dark. I hear music wafting down a corridor. The stars, for a moment, look so bright that it might as well be day. I hear a whispered conversation, but the only word I can make out is "never" .


I must find out what is going on, see what is happening in my formerly logical world. It’s massively important.


I get out of bed, put on my slippers, slip on my dressing gown and tie it around me,- and then I remember that I never owned a dressing gown. It is a soft grey, with pink trim around the edges.


I walk down the stairs, the dull ordinary stairs, but it feels like they go on and on forever. The music has disappeared, and I wish it hadn't. It comforted me, somehow.


The stairs end and I am walking through a cloudbank. This lasts a moment, until it is disrupted by the music again. Very loud piano playing. And then,... A chilling laugh.


I start. I was sleepwalking again, and there is nothing odd, mysterious, magical, or frightening in front of me. It's just Aunt Liza in a bad mood.


"Go back to your room, you silly child," she says in a much gentler voice.


I never did anything in my sleep until I was ten. I vividly remember the first time I did, for good reason. I was dreaming that I was at a ball dancing the night away, when I heard a shriek and woke up to find I had nearly walked off the roof. The second time did not come until I was thirteen, and only I knew about that one,- until I got sick because of standing in the pouring rain.


The response of my family was to make sure I couldn't harm myself or wander into the street, and then pretend it never happened. This only made it worse for me. So, finally, I decided to find out what was wrong. But there was a tiny problem with that; I did not dare to discuss this with a doctor, for fear of being thought insane. One of my aunts, who I was very close to, went mad for no reason. This terrified me...and caused me to have nightmares. But I kept having the feeling that something, or someone, was trying to contact me. I couldn't get rid of that notion, however much I tried.


It was after the incident mentioned above, that I went to a fortune teller. I have not the faintest idea why, since I didn't really believe in such things. But when one is desperate, one does everything out of the ordinary.

That was how I found myself on the doorstep of Ella Perot, a well-known fortune-teller (or con artist, depending on who you asked). The building was tall white brick with elaborate gothic windows. It was about five in the evening on a summer’s day, just as the sun was sinking in the sky. The light was turning pink, and I was being dive-bombed by blackflies.

As I stood there, I thought I saw a shadowy figure disappear behind the house.

Then a chill swept over me, an ominous feeling of deja vu. I was almost convinced that I heard the laugh from my dream. I turned to run…

“Mademoiselle Dean, is it not?” A lilting voice with a soft French accent drifted from over my shoulder.

“Miss Perot! How rude of me to not see you there!” I considered keeping quiet, but the question spilled out. “Is there someone else here?”

I entered a serene corridor, all light grey with slight blue accents. A awe-inspiring staircase faced me, with marble steps and a vine-like railing. I felt a little underdressed as I followed the psychic up to her lair. Clearly, there was a rich relative somewhere in her past.

After reaching the top, Miss Perot lead me through a long corridor before stopping in front of an intimidating door carved with snakes, painted a blood red. She opened it with some effort, causing it to creak loudly.

I saw a charcoal grey room with big windows and a huge dark table as the focal point. On the table lay some cards and astrological charts, a crystal ball the size of a baby's head, some smaller crystals, peppermints, and a half-finished cup of coffee. Clearly no minimalists lived here.

“Assez-vous, mademoiselle,” Miss Perot said, gesturing toward a worn armchair. She muttered something under her breath, and rushed from the room.

I sat as she requested, and waited as a mist of dread came over me slowly. I, as stated above, wasn't a believer, but I was desperate for answers and starting to imagine the possibilities, none of them delightful. A sense of being in an invisible cage settled in my mind.

And then… The laugh. “Oh god what is happening to me?” I said aloud, getting up to flee.

“Pourquoi vous êtes partir?” Miss Perot inquired, as she strode in with two cups of hot chocolate and a large unidentified sandwich.

“Pardon, madame,” I said, sitting back down very quickly. “I was just imagining things.”

Miss Perot raised one eyebrow and puffed disdainfully at a cigarette. “Tell your story,” she said abruptly, handing me one of the cups.

I dived into my story, nervously blurting out the facts. Miss Perot showed no emotion as she listened and blew wispy clouds all over the grim room. I started to feel like I was on trial.

When I finished, there was a long silence. The ticking of a beautiful grandfather clock in a far corner was suddenly deafening.

Muttering to herself, Miss Perot grabbed the cards and shuffled them frantically. She laid them out in a cross and took notes for several minutes.

“Do not disturb me now,” she snapped.

It seemed the divination was far from done. She looked over my hands with a keen eye, then picked up a crystal and adjusted so the light fell on my face.

“Close your eyes and stay calm,” she said in a soothing tone.

Used to her mood swings, I did. I was uneasy. If this was something straightforward, it would be finished, right? Or was she upping the bill and making a fool of me?

“Open your eyes and sit up.” I sprang to attention, blinking rapidly.

“A supernatural presence is trying to contact you and has been connected to your aura for some time, mademoiselle,” Miss Perot stated casually, as if she was commenting on the weather. “Take these herbs. They will help you interact with your dreams and the spirit. $25, sil vous plait.”

Why had I gone there?! Of course she was a fraud! She couldn't contact the thing on her own or tell me what it was, even. What a waste.

I was going to throw out the herbs, but I didn't. I just stared at the brown paper packet with white and blue twine and sighed.

“To hell with it,” I said as I got a glass of water and dumped in the contents. It looked like water from a particularly polluted swamp. I downed it, relieved that the rotten fish flavor was light.

I put on a lace nightgown and got into bed. Though I was frightened and confused, I fell asleep immediately.