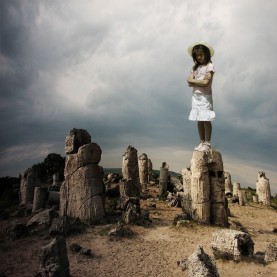 You may have heard the philosopher's remark: that when God and man met in the forest, both bowed before the other and said, 'My Creator!' What you did not hear was that God's true name is Sydney. He will be born tomorrow.

How can it be that the creator of all that is is not yet in existence? It is possible, only when we acknowledge the cyclical nature of things as opposed to professing the linear way of things. On the literal plane, the world is not flat, it revolves on its axis, around the sun, and tomorrow will come again several times, will it not? Will the week not turn another Monday, will the calendar not repeat itself the following year? Let me not delve too deep into the esoteric, the riddles of existence from which, the philosopher said, we unburdened ourselves by creating the immaculate God, the omnipotent being of infinite wisdom who let the wanton king Louis XV die of the pox after a life of debauchery and tyranny; only to revisit those iniquities upon his grandson, Louis XVI, the monarch who lost his head to the mob and guillotine at the height of the French Revolution.

How shall I tell this?

Let me begin with the birth of Sydney. As I have said, he will be born tomorrow, but I shall refer to his birth in past tense, since, it has already happened. Did I not say he was God? He is the creator of everything we call reality, yet will be born tomorrow. We call this field of knowledge pre-history. It is the way by which we, in the past, detail prognoses as events that have already occurred, for indeed, to the truly knowledgeable, they have.

Sydney was born deaf. As nature always does when one sense is impaired, compensated by strengthening his other senses, sight mainly. Sydney was vested with the greatest powers of observation anyone could wish for. His sense of smell was quite acute, almost I dare say, as keen as a hound's. And that, his condition, was his gateway to misery. He did not have to hear the screams of the world, he read them in the tightened -almost to snapping point- sinews of the neck of a mother, the very personification of despair, running, from a burning home, with her child dangling its lifeless head in her arms. He read the desperation in her eyes, and wished those crystals falling from her eyes could purchase just a day for the child, a day so an adieu be bade. Sydney experienced more discomfort than we with all our senses could ever fathom, but as deep as his agony was in this world, so was his love. For that is the nature of things, the Law of Antonyms; John Eppel would call it the necessity of opposites.

Because of his inability to interact fully with his peers, he became a loner, also because of his powers of observation. In a sentence, there was always more to see than to do. And so he stood away from the madding crowd, watching it like a bemused God just awoken from ancient slumber to find the world askew.

The technology we posses today is not the best mankind is capable of creating...or has created. Some of the best has been kept for military pursuits, you should know, war is the greatest spur for man's evolution. Some is being stored away for profit, since we, the consumers, are still so excited with the relatively mundane, the need to introduce it is not yet presented itself. Some of course we do not understand, nor do its creators for creators seldom understand their gifts; as evident in the poet and his aural beauty, or the father and son so often at loggerheads.

But when Sydney grew, wonderful and frightful things were afoot. A person living in his time would be shocked at how Sydney had lived and not had his hearing fixed when the technology was abundant. A nanobot, of which every household owned at least one, could be programmed to accomplish just about any task, would have fixed his hearing in a minute, yet he chose to wear an over-ear, an artificial device he could disable whenever he chose not to hear the world. His affliction was his greatest gift, the one thing he could turn to to truly be alone.

The years of Sydney's manhood were the pinnacle of the space age; one could vacation on Venus, androids were not just green goblins that appeared when you turned on Chinese smartphones, they walked among the humans, they were a race on their own and well perceived as the next stage of evolution. Then they were mated with humans.

Technological strides had been so great that when people died or became physically incapacitated, at least those society and wealth deemed worthy to live on, their consciousnesses (which had been reduced to a few billion lines of Code) could be transferred into machines. They were given a new lease of life with bodies that pumped oil in place of blood.

Sydney grew into this utopia, though Sydney was born into our world, as foul and decadent as you can perceive it to be. Sydney knew the slums and the ghettos, the putrid air of the 'other side' and its vileness. Sydney knew suffering, death, chaos, destruction and despair. These days left their signature too bold on his young senses and when he grew, these imprints formed a strong sense of 'the way of things' in him, he understood the basics of luck, the meaninglessness of things, of life, the necessity of suffering for the establishment of joy, he understood that death was an integral part of life, although he abhorred the political necessity of the ghetto that the elite might live in wealth. How could he, having being born in squalor? But he understood.

There is, in the Kalahari desert, a large solar farm whose existence, until now, was the sacred preserve of a cult of world leaders. Its efforts are complimented by an identical one in the Mojave, built for the sole purpose of ensuring an endless supply of energy to a super-computer that nests in the jungles of Bengali. The computer's hardware is ever upgraded as its software evolves. Every government in the world has a stake in it, and those opposed to the New World Order which the computer will usher in have been removed and conveniently replaced.

At the turn of the century, world leaders met to decide the fate of the world, most, burdened by the wars, poverty, the endless suffering both man and nature inflicted, wanted change and so proposed the ultimate solution which until then had been a theory, a hypothesis, a mere object of fascination and debate in a small African university situated near the ruins of an ancient fountain of knowledge. The programme was called The Elysian Code and theoretically, it would solve all ofmankind's problems.

A computer, would be built, with unimaginable processing power, to scour through the infinity of man's documentation from all revered branches of knowledge: the poets were scrutinised alongside Einstein, Da Vinci alongside Mohammed, Mozart alongside Hypocrite, and the very essence of knowledge, intuition, genius and the soul of the earth would be discovered, distilled and bottled. The Elysian Code would reduce the entirety of existence into a mathematical problem. And solve it.

Soon the code was regenerating the past in holograms, one could walk alongside Mzilikazi in the great trek North, watch the Mutapas hew granite monoliths into bricks to raise magnificent walls without mortar that would outlive time. One could watch the scholars of Timbuktu in heated debate, or marvel at Mayan genius at the pinnacle of Aztec civilisation, watch the sculptor hew Leonidas' last kingly order as he prepared to meet the hordes of Xerxes: “Go, traveler, to Sparta, and say that we lie here, on the spot at which we were stationed to defend our country.”

This was possible because the computer had digested everything, including the gasses in the air and how they had come to their current composition, which was not too difficult since sound in sonar can become picture, just as heat, in thermal imaging, can became picture as well. It settled many scholarly disputes, especially among historians and archaeologists, religions were condemned as fairy tales when the foundations of the world were unearthed. Then the code began to write man's future.

When this new world came it frightened him, Sydney, man was no longer in control of his destiny, the machine he had created as his saviour was transforming the human being, homo sapiens as we know him to the next level; homo machina. The next race of people would not be born of gametes, but engineered in workshops and laboratories, instilled with conscience and reason. This, Society had deemed, would be the end of all war, deviance and delinquency, science, The System had succeeded and accomplished what rulers had endeavored to do for the entire lifespan of the world: create a homogenous society. The age of free-will was over.