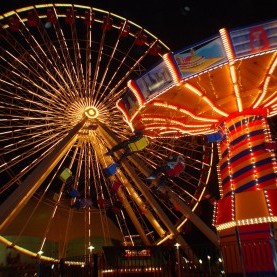 Was given the prompt: a date gone horribly wrong

“You know,” Kayla says thrusting the bucket under his chin, “popcorn butter and urine kinda smell the same. Don’t you think?”
“No.” Chris takes the bucket out of her hands and places it on the ragged carpet beneath him. The puffed kernels are suddenly making him feel sick.
“No you don’t think?” Wide lips stretch over large white teeth. The only part of her he can see in the dim movie theater lighting.
“It doesn’t smell like piss.” It’s a needless clarification. Chris slouches deeper into his seat and pops his feet up on the chair in front of him, kicking over the popcorn as he does so. Good riddance he thinks, feeling sixty instead of sixteen at the use of such a phrase, before he remembers how much movie theater popcorn costs. “Why would you even say that?”
“Cause it does.” She tries to copy him, but only the edges of the soles of her shoes manage to brush against the back of the seat. She gives up and folds her legs beneath her.
Thankfully the sound of a pre-preview movie theater questionnaire lights up the screen sparing him from having to respond to the ridiculousness of his brother’s best friend’s idiosyncratic observation. (Yes, he has just learned that word). Chris does however wish that said brother would hurry up and just get here already.
“Hey, Kit.” She pokes him in the cheek to get his attention.
“Chris,” he corrects.
“Christopher,” she enunciates. “Kit is also short for Christopher.”
Chris doesn’t answer. He thinks that if Michael doesn’t show up soon he’s going to leave the movie theater. And then this girl will have to call her mom to get a ride home. Fourteen year olds these days. Who does Michael think he is to ask his older brother to chauffer him and his friend around? And moms these days thinking because you got one D in one class you’re going to be the world’s bitch.
“Chris.” Kayla pokes him again, in the temple this time.
“What?”
His answer comes just as the movie theater lights go darker, and the person sitting behind them shushes him.
“This is kind of like a date,” she whispers. And even though he can’t see her at all now he just knows she’s smiling.
He doesn’t want to answer and get shushed again, especially now that the previews are starting, but he can’t just let a statement like that hang between them without being challenged.
“It’s not.” He leans in really close to her and whispers just in case the wise guy above them wants to keep being an ass because Chris is talking during a preview for some animated rabbit movie.
“I said it’s kind of like one. I didn’t say it was.” She hasn’t stopped smiling. Chris can hear it in her voice. “Unless you want to go on a date with me?”
“No.”
“Shhhhhh!”
This time Chris feels the wet spray on the back of his neck, and then there’s a hard kick to the back of his chair. He can’t help but think that this psychopath sitting behind him has a leg the size of a beluga whale. If only he had his baseball bat with him. Orca or not this bastard would learn how to shut up.
“Why not?”
There’s a definite whine in her voice now. He really should have left her here and come back in three hours to pick her and Michael up, but gas money is no joke and if he wasn’t here his mom would have him doing SAT prep at home.
“Shut up, Kayla.” He hisses it so that there’s no way the shushing idiot can hear him over the noise of some horror movie preview – some demon possession shit.
“That’s mean.” Her voice shakes and ninth grade or not she sounds like an eight year old about to cry. It’s much scarier than the decapitated baby dolls screaming on the theater screen.
He’s going to kill Michael later. Or maybe…
“Michael likes you,” he says and leans back in his chair, content in his lie. That should shut her up for a bit.
“Huh?”
Damn it. Darkness has no effect on his ability to pick out his brother. Michael’s voice still cracks and he has always managed to take his seat soundlessly.
“Where the hell were you?”
“I had to excrete fecal matter.” Michael grimaces and his bony shoulders rise obscuring his neck so that there’s just a yellow bush on top of his red Nike sweatshirt. Chris is a bit annoyed with himself for knowing all of this without even turning towards his idiot kid brother.
“That’s disgusting.” Complains the girl who compared popcorn to urine.
“Shhhhh!” The spittle is followed up with another kick against the back of Chris’s chair. This one much harder.
Baseball bat or not this saliva demon needs a good beat down, Chris thinks, and he’s going to deliver.
**
“That was kind of fun.” Kayla smiles into her soda as the three of them stand outside of the movie theater.
Chris runs his tongue against the salty inside of his cheek and rubs the elbow where he’d managed to collide it with the idiot’s chin. Who would’ve thought the usher was standing in the aisle ready to intervene the moment after that loser put Chris in a headlock.
“So, can I drive?” Michael asks. “I’ll be fifteen next month.”
“Shut up!” He stops himself from walking away quickly because he hasn’t exactly recovered from falling over the chair, and he has baseball practice tomorrow.
“Well,” Kayla says still smiling. “I thought it was a good first date.”