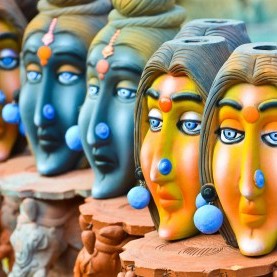 
I was coming back from sitting with a dying relative. I had driven a long way from home and after my aunt had passed a little after two am, I was lost in thoughts of mortality. The comforts of home and my warm soft bed lay at the end of this long drive. I planned on sleeping in this morning and taking care of my aunt's details on the morrow. I had a three day leave from my job as a frozen food stocker and I wanted to enjoy at least one day lazing by the apartment's pool, drinking margaritas and ogling skimpy bathing suits.

The girl appeared from nowhere. I jumped, startled at the sound of her voice at my elbow as I sat waiting for the light to change. The streets were devoid of people and cars at this time of the early morning other than the odd police cruiser flying down a side street lights flashing. Her voice was strained and harsh for one so young.

I stared at her for a second. She was quite pretty beneath the greasy dark hair and dirt smudges. Her eyes were dark brown, with a sad expression, and turned down at the lower corners. They stood out from her slim angular face and her olive complexion suggested Spanish descent. The tattered army coat swallowed her young body but was open enough to reveal that she was slim and fit. I judged her age to be anywhere between seventeen and twenty one.

Her expressive eyes drew me to stare longer than I meant too. My first instinct was to say no and drive away...but I couldn't. I broke the stare and mumbled, "Get in."

"Without a word of thanks, she bolted around the front of my Jeep and climbed in beside me wafting an odor that suggested she needed a bath and had engaged in sex recently. My male hormones reacted immediately and my khakis got uncomfortably tight below my seatbelt.

She tried to give off a personna of being tough but I sensed she was soft beneath her facade...sweet even. I asked her where she was headed.

"Just drive. Follow this road out of town and I'll tell you where to turn. Don't get no ideas Mister, if you try to rape me...I'll kill you."

"Rape you?" I was genuinely shocked. "I'm not a rapist. I'm just trying to help you!" I spluttered indignantly.

"Then put that thing back down." She said, glancing toward my crotch.

"I can't help that my body reacts to you, you are quite lovely." I spoke softly and lavished a long look at her.

"No I'm not. Do you really think I'm pretty?" Her voice was tinged with eagerness and that didn't help Mr. Trouser Snake to relax any.

"You are. I mean with a shower and some different clothes...I'd even say you might be beautiful." I was being honest.

She snorted derision, but a softer expression toned her face and those liquid eyes. "My name is Anna, Mister. What's yours?"

"Tom." The lie slipped from my lips smoothly and naturally. "What are you doing out here this time of the morning...alone?" I couldn't help but ask.

"Well...Tom." (I had the uneasy feeling that she knew I'd lied about my name by the way she emphasized 'Tom') Now that we're not strangers any more, (Her voice held a note of sarcasm) I was on what you old-timers call...a date...with a guy I know. He decided to buy some drugs. Things went a little bad. He got shot and I got raped. Helluva night, you know. They passed me around. One of the dealers decided I was his new "old lady". I stabbed the guy with his own knife when he went to sleep, climbed out the window, and ran. I hope the bastard bled out and died."

"What the hell! Are you okay? Do you want to go to the hospital? Or the police station?" I was babbling.

"No to all that. Calm down Tom. I'll live. I don't think Greg did though. They shot him up pretty bad, then hauled him off somewhere. I just want to get somewhere safe and sleep. I've been up for days."

My brain raced. I had become an accomplice to all sorts of things by simply giving someone a ride. Mama always said to never pick up hitchhikers...now I knew why. This felt surreal. I looked over at Anna. Was she just calloused to the point of no return? Or was she just so tired and in shock, that the implications of what had happened to her hadn't registered yet. I was betting on the latter. Mr. Trouser Snake had decided to calm down, but was ready at any moment to rear up again. I tried to watch the road and concentrate on my driving.

"You can come to my place." Where the hell had that come from? I had said it without even thinking. Now I immediately regretted it. I was scared she'd take me up on it. And scared she wouldn't.

Town had disappeared in the rear view mirror and we were now moving through a stretch of highway that was bordered on each side by dark woods. I glanced over at Anna. She had fallen fast asleep cuddled up to the door of my Jeep. She looked so innocent. Why did lost souls always appeal to me, I asked myself. And such a pretty one at that.

The thought occurred to me that her attackers might try to find her. After all, she could identify them. We might have to do something about that. But later, first let's get her to my place and get her cleaned up, fed, and rested. Making her world safe could be taken care of after that.

And I still had to do something with the body of my last victim that was wrapped in a tarp in the back. I had planned on finding a nearby lake and disposing of it there, but right now Anna was more important. I would have to do something with it soon. I didn't want my Jeep to get all smelly like my old Pathfinder had. Uggghh! It got so bad I had to take it out in the woods and burn it, after removing the Vin tag and license plates.

The sound of soft snoring came from the passenger side. I smiled. Anna and I would have so much fun together.

Great story, I just had an issue with the twist toward the end, for it it came too quick, one minute we are dealing with grief, then he is afraid then he is a psychopath. I'm sure with more space you could have done it justice.