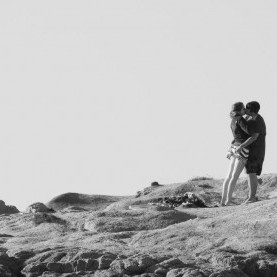 Best Friends decide to see where their relationship could go...

“But I’m not in love.” Ethan McGinnis removed his Atlanta Braves hat, ran his calloused fingers through his wet hair. The glare he aimed at his music producer demanded answers.

Daniel slowed down his treadmill. “That’s what I’m saying.”

Ethan pressed the emergency red button on his machine to turn fully to look at Daniel. If Daniel Reeves wasn’t the best beat maker in the business, he would walk out of the gym, and not look back twice. “I’m so confused.”

Daniel kept looking ahead, pumping his arms, “Eth, I need you to fall in love.”

Ethan hit Daniel’s red button. When his friend turned to face him, both almost the same height, Ethan just a few inches over Daniel’s six feet frame, he recognized his friend’s sincerity. Ethan shook his head in disbelief, “Me? Fall in love? Just like that? Go up to the next girl and say, ‘Hey, do you want to fall in love with me today?’ No girl will fall for that.”

Ethan scowled as he watched Dan move to the free weights, “Shit. I know who you’re thinking of. Her picture is in the dictionary next to romantic.”

He smirked, “But she’s your best friend.”

Ethan’s laughter reverberated in the small area, “Leigh isn’t going to go for this.”

Daniel placed the free weight down, and turned, “That’s why it’s your job to convince her.”

His hand slid down his face, rubbing square jaw covered in stubble, “What exactly do I need to convince her of?”

“To become Mrs. Ethan McGinnis,” he said without blinking.

Ethan dropped on the chest press bench; his head fell into his hands. “Back the fuck up. Why am I doing this?”

Not able to sit still, Ethan shuffled to the pull up bar. “Right. I don’t think you’ve actually heard my music since we were in band together in ninth grade,” he said. He jumped, hung for a second, and smoothly pulled his body up and down.

“You are everywhere, my brother,” Daniel pointed to the television monitor playing Ethan’s first single, “Roll.” “Plus, I lived with your biggest fan used to blast your mixtapes in her room; over and over again. It was a little obsessive if you ask me.”

Without pausing he said, “I’m glad no one has.”

Daniel leaned against the mirror. “When does Compass kick off?” he asked.

“We get on the road Thursday.” He jumped down.

“Yep, but you knew that.” Ethan’s brow lowered, his full lips lowering, “Stop stalling, Danny. What the hell is going on?”

“Well, you know we love you at JB records. I mean, you are the highest selling artist signed to the label. Your tours are world class. The ladies love you; the men want to be you. This is the best time to capitalize.”

Ethan threw his long arms up, “Dan, cut the bullshit.”

“Your fan base is waning,” he said. “The teeny boppers who loved you three years ago are growing up, and you need to grow up with them. You can’t keep singing about hitting up the beach when your fans are getting married and having babies.”

“So, you want me to write for a more mature audience?”

“Well, it won’t seem genuine when you just pop out of nowhere singing songs about love. It has to seem authentic. Like you really fell in love.”

Ashleigh Reeves looked down at her vibrating iPhone 6. Striking blue eyes stared back; she allowed herself three seconds of looking at the picture she took when they were at Six Flags several summers ago; she kicked the call to voicemail, and continued taking notes for her boss. It vibrated again. Her boss’s scathing glance had Leigh scramble to silence her phone. She cursed the pleats in her skirt and her freshly manicured fingers. She declined the call, and opted for a text message:

She stared at the three dots at the bottom of her screen.

Leigh glanced around the board room before replying: N.

Ethan: ROTFL! See you then.

Leigh beamed. After a glare from her father, her pumps landed flat on the floor, and button down starched to the seat. She turned her attention back to the meeting.

Bodies jammed together inside of Thumbs Up on Auburn Avenue, but Leigh knew the hostess, and she squeezed Leigh into a booth before the other waiting guests were wiser. She opened her favorites to calls Ethan when she spotted his blonde spikes towering above the other guests.

“Ethan!” His eyes widened in recognition, and made his way to their table. She took a moment to admire him in a red plaid shirt rolled up to his elbows and his khaki shorts.

Leigh blushed; her bronzed skin not hiding her high color. She willed her heart to calm down, “Hey, handsome, going to the farm later?”

“You’re hilarious,” his smile blinded her. “Have you been waiting long?”

“No,” her corkscrew curls bounced against her face. “But I did order for us. I have to get back to the hell of the office.”

Both elbows hit the table, Ethan leaned in. His square jaw locked, “Who do I have to beat up?”

Her manicured hand waved in the air, dismissing him. “I don’t even want to discuss it,” she said.

He scowled, his full lips drawn into a straight line.

Leigh’s hazel eyes narrowed, “Fine. We’ve had some dips in our music sales.” Leigh ran her hands thru her curls. “People just aren’t staying loyal to a particular artist. We’ve got to find an angle to make sure our best get their money.”

Under the table for two, Ethan nudged her knee. His pale fingers entwined with her almond ones. “Y’all’s record label is the best in the south.”

Mindlessly, she started to thumb wrestle. “One. Thanks, but it’s not because of me. Dad won’t let me near any clients.”

“Hmmm. What do you think about my sales? One.”

“Have you talked to my brother?”

“Daniel met with me yesterday, actually,”

“What did you and your BFF talk about?”

“Is that jealousy I detect?”

“Why would I be jealous? I know who your real bestie is.”

“Do I have to remind you of the rather intimate, matching best friends forever tattoos?”

“You’re losing fans big time. You have to start appealing to our age group.”

“You also need to share their lives ambitions. Like marriage and kids. Many people want to feel their super stars are just like them, and that what image you need to project. Someone who is getting serious in life. One who is falling in love, getting married, having kids. Even if you don’t do that, the appearance of it will improve your public persona.”

“So you’re suggesting I find someone, and settle down?”

She bit her bottom lip, “A hasty relationship isn’t what your fans need. They need to see the journey. So, you just need to be more public and strategic in taking women out.”

Ethan stole a fry off her plate, “Woman.”

“I just want one woman. That would seem like me. If I start parading hordes of women in front of the camera, my fans are going to see me as a player. I want one woman.”

“That works. She shouldn’t be a celebrity. This is about you. Not furthering her career.”

“Then what would she get out of this fake relationship.”

“I don’t know. What are you willing to give?”

“Tickets to my concert.”

“Ass. What about companionship? Maybe sex?”

“That would make us whores…”

“No, that would make you more willing to stick this out. You cannot go fucking other women!”

“Then you and the chick have to come up with something y’all can agree with.”

“What would you arrange?”

“If I propositioned you, what would you ask for?”

“I would demand three things. One: at least two dates a week, one must be a lunch date. Two: a phone call every evening asking about my day. Three: regular sex.”

“Ashleigh, you’re not that simple. What is that big ticket item?”

“I would want to go on tour. I want to see the world, and that would be exciting to go on a road trip.”

“How long would this charade have to go on?”

“At least six months, and then a marriage that lasts at least a year.”

I think that this was a good start. I would be interested to see where the story goes? Is it going to be obvious? Or is there a twist in the tale? Perhaps some of your descriptions were unnecessary and it would be cool to get into the head of the main character a bit more. What does he think of all this? Well written though and I could see that there was a plan.

Haha, the first thing I'm going to say is that no sibling in his/her right mind would ever give a blessing to a friend. If you met someone like that, they are a needle in a haystack. I don't mean to be rude, but I just found it funny. I'm trying to imagine my older brother telling his best friend to fall for me, and it's just not adding up. I started off with a fallacy, so I'll now point out what I think you've done well. The characters were great. I connected with Ethan and Daniel from their first few lines, and reading on, ever character was a joy to watch. I really enjoyed the banter here, very nice. Your hook was also incredible. I loved how you ambiguously used Ethan's dialogue to draw me in. I also adored the character description. It wasn't so over-the-top that it took over the story (because I've seen some like that), but it seemed very balanced and executed nicely. Now, criticism. You need more narration, especially toward the end. It became so bad that dialogue seems like it took over most of the story. That's a big "no" in writing, romance or not. I'm aware love is primarily driven by conversation, but it was just too much. Along with that, there needs to be more imagery. Time passes, yet it seems the character's are lost in a blank space, talking and doing nothing else. I couldn't really picture much in my head when it comes to setting. It was kind of sad to be blunt. Overall, I liked the story. To me, the strongest point was the characters, and the weakest point was too much focus on dialogue.

Your use of dialogue works really well as well as your buildup of suspense.
Tweets by @thepenfactor