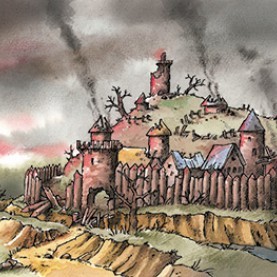 Indulge in fables before focusing on the real issues.

The heavens were in mayhem. Two goddesses, created by humanity, were in discord with each other. Their quarrel had cause chaos to wreck a peaceful realm. Lightning had crashed in a field; blood had rained from the sky. The goddesses were out for dolor.

A priest had tried to soothe the clash, but it was to no avail. He had lost his power to soothe the gods. Those stubborn deities had simply disregarded the churchman, his punishments never reaching their sacred forms. They continued their feud, tearing apart the land.

Two villages of progeny had divided, each choosing a side to worship, each praying that this strife would end. They waged a war to prove loyalty, but it only added to the desolation. No one was spared from the woe, not daemon or cherub. As the destruction grew and grew, it was obvious that there needed to be change, for the deities were unyielding in their vendetta.

In an attempt to please the goddesses and revolutionize their nature, the villages had fabricated a solution; they would offer a sacrifice, a being to strike to divert the deities from their fray. And, without as much as meditating their decision, the crazed villages had chosen a scapegoat.

Ah, yes, it is he. The lamb that was selected had no sins on his back, not one burden of transgression, yet the villages had come together in a phony pact to punish their whipping boy. Everything was slowly slipping into anarchy. As the priest tried to halt the raving villager’s immorality, he was trampled and retired.

The goddesses simply laughed at the lamb’s plight, “Yes, yes, we simply eat up his terror. Give us more!” The mortals cried with joy, tearing apart the lamb’s clothes, ripping into his flesh. Red, red, red stained the lamb’s white wool until it seeped into black.

“Someone, anyone, save me!” wailed the lamb to the corrupted beings. He held his head as the children kicked him in their flawed wish for peace. His sobs festered into despair, the crescendo of hysteria never faltering.

The torment continued as the villagers took the blood from the lamb, day after day. The artificial goddesses drank up his fluid, turning the ichor to crude oil. He was imprisoned in this cycle of harmony among the pugnacious progeny, his life for their equanimity.

One day, when the lamb was lamenting his misfortune, a shining figure approached him. She was dressed in satin and ivory, pure and heavenly. She was not ignorant to the abuse of the pitiful lamb, however.

“Ah, poor little lamb, such a sweet, pathetic child. You had appeased those unholy shams, but at what cost?” The words held such gentleness and affection. The lamb drank up the warmth, not caring of the covert repercussions. “Once you have passed the tribulations humanity has bestowed upon you, God shall grant you a reward.”

With such a tender smile and benevolent persona, the lamb was faithful to her sermon. In that moment, he took his savior’s hand and looked into her beautiful eyes. He surely thought: this is an angel; disregarding the odious, black wings that were prospering behind her.

His trial was to climb to the apex of the land and cross the barrier to heaven. His boon would be presented in good faith, a chance at retribution. The lamb was burning with yearning, fervent for his pure recompense in the form of incorrigible vengeance.

“If you pass this test,” The angel spoke as the lamb climbed upward, step by step, “I assure you, the villages will burn.” No longer driven by honeyed words, the lamb persisted in his trial, following the foolish path carved by his never-ending suffering.

Seeing his unbroken determination, the angel had left the boy. She had shed her empyrean veil and returned to her position in the village. The false angel was apathetic toward both the spurious goddesses, and she simply wished to see raw pandemonium ensue. She smiled her heavenly smile and hummed, “Oh, wretched, sinless lamb. I cannot wait to swill on the misery,” a goddess in the making.

She watched as her lamb approached the edge of the apex, his bijou frame open for all to see. As he stepped toward the barrier that separated him from heaven, villagers and priests crowded down below. They wailed, “Stop! Stop!” Their scapegoat was about to be wasted.

The black lamb gazed down upon the compeers who had all turned against him. He let out a chuckle of contempt as he walked off the edge, whispering one last request. As he fell, the kind lamb lambasted the system of cruelty, praying, “If at one time, another soul is subjected to treatment like mine, I wish for him to follow a better path and escape his affliction…

“… I wish for him to end up differently from me.”

Not a soul had heard his wish, for God was no longer watching. As he fell through the air, he watched as the door of hell opened for him, knowing fully that the angel was a liar. He closed his eyes and accepted the end of his torment, forgetting the reward he was promised.

The false angel did not forget, however. The villages will burn. She watched through her fake tears as the children around her scrambled, weeping and crazed. No one had wanted the lamb to end like he did; no one had wished for this mayhem. Even the goddesses, in all their fading glory, mourned for such a loss. The false angel had not.

She simply fabricated her cries, pretending to know of the boy’s nature reduced to twisted carnage on the dry ground. “He was a friend!” She lied. “He was my friend!” She laughed, hiding her intent with tears.

The ambulances arrived, taking the lamb away. A corpse reunited with his ignorant parents in the schoolyard. The false angel gave her condolences and waved a goodbye as the police drove away, the adults confused by the wreckage.

With the fallen goddesses and departed priests, the villages of progeny were in turmoil. No one was there to lead the foolish peasants, lost in their balance for peace and bloodshed. The fallen angel smiled. This would be her coup d’état to power.

A scandalous ploy starting with two children “goddesses” ended as a tragedy. As the new “goddess”, the false “angel” had delivered on her promise to the departed “lamb”. The “villages” were ablaze with chaos; as such school children were unsure how to deal with the death of the “lamb” they all knew yet willingly harassed.

A boy who died as a useless martyr, his final wish was never granted.

I enjoy your mythological approach to this short story. It is descriptive and passionate. If you were to revise this, I would suggest that you look at character development to help with your clarity.

Your ideas are extremely intelligent - perhaps too intelligent. You use wonderful language and sophisticated vocabulary throughout. However, I thought, at time, the vocabulary was a little two sophisticated and often interfered with the meaning of the story.