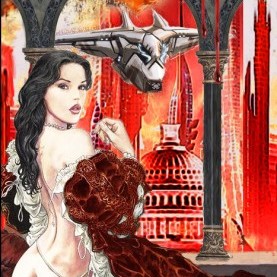 At the end of a world war, Peter, a top Human Security agent, returns to the city of New Geneva where a race of people who call themselves vampires are allowed to live alongside humans. A terrorist bombing of the Human Government Block sets off a wave of anti-vampire violence and so begins the military regime of Interregnum.  In the war-torn city, Peter, framed for a political assassination and obsessed with the seductive Caterina Mocenigo, a head of a powerful vampire clan, attempts to unravel the mystery of the vampire origins and - you guessed it - save the world.

My life hangs by the scarlet thread of your lips;
my death lurks in the twilight of your hair.

My lander shook, slamming into the invisible partition that separated Vinegia from the swirling gaiety of New Geneva in the throes of the upcoming Halloween. The blue lights on the black spikes of the gates flickered, checking my clearance. The mists of Vinegia rose, obscuring the neighbourhood I had never been to, in my entire first month in New Geneva. The month spent in protocol training, physio for my re-grafted left arm, and staring at the ceiling at night as Stella quietly breathed on my shoulder. I preferred insomnia to nightmares.

The hold on my lander lifted, I burst down the avenue of dark cypresses, their branches scraping the sides of the cabin. I flew low, on the C level, since I was neither rich enough to afford the posh B, nor important enough to access A. Past the swirl of green canals and stuccoed pastel houses, I touched down in a quiet enclosure of rustling crimson leaves. The house loomed, tall and forbidding, the iron lions at the door training the muzzles of their stares on me.

The skull came out of nowhere. I had only reached out my hand to the door, waiting for the glow of the identifying scanners, and a touch at my elbow made me jump and swear. A skull mask, surrounded by the hood of a voluminous cloak, leered at me, one eye- socket dim, the other outlined in glimmering blue.
“I wouldn’t, if I were you,” the skull leaned against the door, barring my way. I couldn’t tell from the voice if it was a man or a woman talking from underneath.

“I have an appointment,” I hardly wanted to start off my first assignment in my first civilian job with a fight.
“Yes, you definitely look like Her Majesty’s type of appointment.” The skull reached a black gloved hand into its cloak and produced a frail faintly pinked rose. The flower’s scent wafted on the still air. “Tall, blond, ripped, just the way I like ‘em too. Coming to the party tonight? The rose will track my signal. Find me, handsome. We’ll have fun.”
The rose was thrust at me, and I took it in my left hand, too stunned to protest. The thorns pressed into my fingers. I could feel their prickle. The surgeons and the physiotherapists have done their job.

The skull leaned to my ear and whispered,
“Where did you crawl from, soldier? Nepal?”
“I’m not a soldier,” I shoved the rose back and swept the fellow aside, feeling the bulge of his muscles as I did. “And I don’t do parties, and I don’t swing your way.” I slammed my palm into the door. The identifier pinged, the door slowly pushed back, hinges whining, into the twilight within.
Behind my back, the skull hooted,
“In Vinegia, we swing every way. Get used to it. But have that pesky PTSD of yours seen to. Her Majesty will not like it, if you scream and squirm.”

“I do not have PTSD!” In spite of myself, the words leapt from my lips after being repeated for three solid months to every doctor who saw me.
“Yes?” The shape that appeared in front of me on the threshold coagulated out of the house’s murk. I whirled around. The skull was gone. Nothing but the ripple of leaves bleeding from the veins of autumn, where he stood only a minute ago.

“I’m sorry, did you see …” I dropped the rest of the sentence. The dark lump, no face, nothing, just a vaguely human figure thickly swathed in impenetrable layers of cloth, did not invite conversation. I coughed. Adjusted my tie, buttoned up my dark-blue jacket, and said,
“My name’s Peter Baine. I’m here to see Ms. Mocenigo.”

The dark shape nodded and limped away from me. I took that as an invitation to follow.

I was left to wait in a grand hall tiled with gold and indigo and topped off with dim arches. Light filtered in through tall stained glass windows, and the shifting shadows brought to life the portraits hanging on the walls. In one, a naked youth, white curling hair spread over his shoulders, knelt at the feet of an older man, wrapped in a scarlet mantle.
To my left, another portrait clamoured for attention. A young woman, decked out in disturbing and gaudy crimsons, a large collar heavy with pearls, ropes of pearls cascading down her wide brocade skirt, turned half-way on her passage between light and shadow. Her face was strangely familiar, a ghost, a fantasy I could barely remember, but the memory of the longing it stirred was real.

The mouth was the exact colour of a pomegranate, and the skin was an opalescent white, stark against her darkly-fringed eyes of greenish hazel and haughtily arched thin eyebrows. Her dark curls, set with clusters of rubies, reached down to her waist. I stared at the painting and then, the woman in it grinned and turned to face me, nearly making me scream. It wasn’t a portrait at all. Just another holo.
“Sorry to keep you waiting, Mr. Baine. Though you did come early, in fairness.”

If the portrait had spoken to me, I would not have been surprised. But it hadn’t. The woman I had just been staring at stood in front of me, surprisingly petite. Instead of the Renaissance finery, she wore a demure grey dress, its knee-length skirt wrapped tightly around her smooth hips, and her long legs ended in a pair of dark-grey pumps. She wore no jewelry, except a gold locket, and her hair was pulled into a knot low on her neck. The face, the eyes and the mouth were exactly the same, however. I could barely take my eyes away.

“Forgive me,” I put in a short ceremonial bow, “I am new to New Geneva, and better early than late, no?”
“Depends,” she extended her hand to me, “you might find that some of us are so big on ceremony, failure to show up at the exact time is the kiss of death.”
I must have twitched at her “kiss of death” crack because she laughed.
“Don’t worry. Guests are not dinner. Would be awfully bad manners, no?”

I took her hand. It felt normal. No gelid or burning fingers, no curling nails. Just a soft warm palm of a young woman. The nails were cut short.
“Come on in,” she nodded.

A wall tapestry lifted, revealing a silver panel that slid aside. I came after her into a modern office. A large window showed Venetian lagoon under the sleeting rain, probably a simulation. A BrainSpace console - a virtual keyboard, three huge holographic screens, one of them swirling Mandelbrot sets in lush colours - hung by the vast desk piled high with parchment scrolls and transparent shiny cases of the top-secret mem-scans.

“Take a seat, Mr. Baine,” she indicated a tall guest chair in black leather next to her desk.
“You can call me Peter.”
“You can call me Catherine, in that case,” she sat at her desk.
“Not Caterina Constanza Beatrice Maria Bianca Contarini Foscari Mocenigo? Damn. And it took me a whole two weeks to memorise.”
“I appreciate the effort,” a light smile touched her lips, “but Catherine is still fine.”

“Now,” Catherine made the holograph of the BrainSpace panel float towards her and touched her hands to it, “I gather that you have not yet been fully trained in all aspects of the protocol. Judging by your gaffe of showing up early?”

Stella Grimaldi had gone on nauseatingly about the importance of showing up on the dot, but I did not believe her. Sure, Stella was a personal secretary to the Minister of Human Security, but these New Geneva bureaucrats seemed to revel in the absurd rules they made up for their own amusement. How was coming a few minutes early a big deal?

“I do not mean to chastise, Peter,” Catherine went on, “but I do not think you appreciate the import of your position. In fact, I marvel that Human Security had chosen someone freshly demobbed, even if a senior officer, to become the Diplomatic Relations Liaison. This job requires finesse, a thorough grasp of history, and a depth of cultural understanding I do not expect you possess.”

Great. She had only met me a few minutes ago, and she was already lecturing me. And how the hell did she know that I had been a senior officer - a major, so not that senior - before I came to New Geneva? I had been assured that those records were sealed. Somebody was getting a serious talking to, when I came back to work.
“You might find, Catherine,” I did not want to antagonise her, “that I am a quick study.”

“All right,” she shrugged, “long as you are up to it. And if not … humans die rather quickly, don’t they? I just hope your successor would be up to the task, if you aren’t, that’s all.”

Great introduction into a world that is intriguing and one that I'd like to know more about. The character of Peter is well defined and his relationship with Catherine is already one that seems to be of interest.

I loved your descriptions! I feel like I landed in the middle of the story, so it took a bit of time to find my feet. I loved your scary characters, they are super spooky. I loved the way your writing flows even though I am not so sure what is actually going on. You are a wonderful writer!
Tweets by @thepenfactor