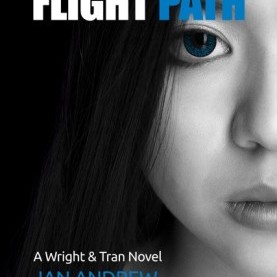 Kara Wright looked through half-closed venetian blinds at the busying street-scene below. The weak, wintery November sun hadn’t yet managed to rise above the tops of the buildings, but a limp infusion of grey crept down the Kentish Town Road. It gave just enough light to pick out the heavily-cocooned early-risers, struggling against the wind that threatened to freeze them before they reached the warmth of their work.

She frowned at the weather awaiting her, but for now, wrapped in her dressing gown, towel atop her head, cup of tea in one hand and a slice of toast in the other, she was quite content. Her day didn’t promise much.

A half hour from now she would venture out for a run with her business partner, Tien. The rest of the morning would be spent working on some background-checks for a City-based HR firm, followed by an afternoon meeting with a financial advisor called Shonel, who was trying to inform her about the best way to plan for the future. Kara was yet to be convinced about share portfolios, unit trusts or Government bonds.

She took a bite of toast just as her mobile phone vibrated its dull drone on the coffee table. Chewing quickly and taking a swig of tea to wash it down, she made her way across the room and noticed the incoming call had its number withheld. Placing her cup on the table, she retrieved the phone.

She had spoken to the old man only twice before. Once in the Huntingdon Police Station when he had first approached her and once in a pub in early August, when they had established their communication protocols. Since then there had been nothing. Her life had continued, seemingly unchanged, yet immeasurably different. She had waited, not patiently, but waited. Now, his calm voice sent a frisson of excitement through her and she felt her heart quicken.

She glanced at the phone screen to check the time before putting it back to her ear, “Yes, today. I make it 6:27?”

“Zero is fine,” Kara said and the call disconnected.

She sat in her favourite squishy armchair and reached for her tea. The towel on her head sagged against the soft upholstery and the tight tuck released, allowing gravity to drape the damp cloth down over her shoulders. Kara didn’t notice. She was busy running through the procedures that had been agreed at their last meeting. They had determined that their relationship, not quite illegal, yet not quite above board, not exactly clandestine, but certainly not open, needed secure means of communication. Electronic telecommunications didn’t provide that in the present day.

They decided to reinvoke the best of the old tradecraft skills, practised for decades during that often hot, Cold War. No one could bug everywhere in London, so all they needed was a way of establishing meeting points without having to mention them plainly in phone calls. That needed a code but one that had to be cipher-less. They weren’t in the game of swapping code books, or driving past dead letter drops. The old man had had a good laugh when she had suggested chalk marks on benches or lampposts. She remembered him sitting opposite her, in the rustic and charming surrounds of a real-ale house in Pinner, his thumbs tucked into his waistcoat pockets like a Dickensian patriarch, ‘Oh no my dear Kara. My days of looking in rain swept vistas for a dab of chalk are long gone. We shall be simpler. You and I shall choose a suitable mix of locations and use them to our advantage.’

The resultant system was indeed simple, yet robust. A phone call made by either to the other’s normal mobile number, from an untraceable burner phone. That eliminated the two being tied to each other by traceable phones, yet allowed them each to call a single, easy to remember number.

The caller would request a meeting. The date of the meeting determined the location. The rendezvous time would be plus four hours from the time of the call.
To work, it only required a list of thirty-one prearranged locations. Dependant on the day or the time they could modify the date-location by adding or subtracting numbers. If the meeting was to be on a Sunday at 09:00, there was little chance of using one of the pubs on the list.

Other than knowing the locations, the code needed nothing else and it gave enough variables to make counter-surveillance a practical impossibility. They built in a single contingency for meetings that needed to be called in dire emergencies, but strived to keep things as simple as possible.

Kara had used a memory-story placement technique to memorise the thirty-one locations. The meeting was today, the eighteenth, and the modifier had been zero so it was the eighteenth location, the identity of which came easily into her mind. Finishing her tea and toast, Kara picked up her phone and dialled the first number on her favourite’s list. It rang three times.

“Want to go for our run now and keep it short?”

The call disconnected and Kara hustled to get changed. As she was lacing up her running shoes she smiled at the thought of her friend. Never one to enjoy long runs, Kara’s offer of a shortened effort would certainly have pleased Tien but that wasn’t what made Kara smile. The two of them had an instinctive awareness of each other. Tien had known it was more than a shortened run, she had known something significant had occurred but shut down her requirement to ask anything about it. There was no, ‘why, what’s going on, is everything alright’ on the phone. Just an acceptance and confirmation. It was true they had been partners for a long time, but they had always had an intuitive link. Kara could clearly recall their first brief meeting, when what looked like a walking Bergen had come through the flaps of a tent pitched on the edge of Basrah Airport.

It was February 2006, Southern Iraq was pleasantly warm but the dust was being whipped about in strong winds, assisted by the jets and propellers of a seemingly constant stream of aircraft arrivals and departures. Out of this swirling yellow maelstrom appeared a lightly-built, delicately featured girl with the rank of Lance Corporal and a look of nervous determination.

Kara had almost laughed at the size of the rucksack the girl had been lumbered with, “You must be our little helper, sent over from the Int Corps?”

“Great. Dump your gear and grab a brew. I’ll take you through what you’re going to be doing for us. What’s your name?”

“I’m Lance Corporal Tien Tran and given the ranks in here, I guess you can call me whatever you want.”

Kara was still smiling at the memory when she went out her front door into the freezing cold of the November morning. The sun, still not visible above the rooftops, was lending the street a strange silvery hue, mirage-like, as Tien rounded the corner.

“I’m not stopping, it’s too cold,” she called out in puffs of condensation as she passed.

Once Kara had caught up they settled into a comfortable side-by-side rhythm, heading north to the open spaces of Hampstead Heath.

“Franklyn called, it appears we have a meeting,” Kara answered, watching her friend as she said it. The reaction was as she expected.

“Do we know anything?”

“Not yet, but we will when we get to location eighteen at 10:27. I just need you to confirm that my memory is correct.”

Tien set off jogging again. She too had memorised the list using her own technique, “I think today is a lovely day for a trip to Canons Park,” she said.