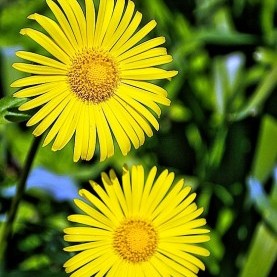 Throughout her life, she had always longed for her own epic love story.

She searched high and low; far and wide; up and down; inside and out, but alas, the love story was never to be found. She tore her heart open, served it on a plate and pieced it back together using tears and tape. She spoke truthfully and was rejected; she lied and was frowned upon; she kept quiet and was berated; she shouted from the rooftops and was told to shut up. She never found her love though - the love she so desperately wanted. Oh, she loved, but always questioned whether it was true.
Throughout her life, she had always longed for her own epic love story.

So, she sat down and wrote one.

And she found love.

The days were long and the sun hung low in the sky. Despite the sunlight, there was little warmth in her life. She felt old and rejected. She wasn't old, but somehow life had passed her by. She had seen her body change over time. Child birth had taken its toll on her physically and she looked at the silver ladders that climbed the top of her legs. Sleepless nights had left her skin greying and her once bright eyes were dull and watery. Every morning, she would reach for her makeup bag and fill in the lines that traced across her face. The makeup was her armour; it protected her from the world and it made her look lovely. She was lovely - she had just lost her way.

It wasn't that he didn't love her nor was it the fact that she didn't love him. Once, a long time ago, they would smile and laugh with each other. The laughs now were distant memories - relics that stood on dusty forgotten shelves. Now, when he looked at her, all she saw was distain and scorn. She could see it in his eyes. Every time she spoke a word, his eyes would mock her and his mouth would sneer. Or so she thought. It wasn't always like this, she would tell herself. She didn't always sleep alone listening to the deep rumbling of his breath in the spare room. She didn't always stretch her legs to the bottom of the bed and feel the cold grasp at her ankles. No, in the years gone by, she would entwine her legs within his and steal his warmth.

She didn't always wake up alone.

One day, as she was running a daily errand, she saw someone she used to know. Deep within her soul she felt a kick and she found herself gasping for breath. He wasn't a lost love. He wasn't her first love. In fact, he was never a love. But, he could have been. Their brief moment of friendship had been a series of moments, a multitude of fleeting eyes meeting across crowded pubs and clubs. Hands had brushed. Palms had sweated, but a kiss had never been shared. As quickly has it had started, it finished. He was swept up into another relationship, fell in love and wrote his own epic love story. She wondered lost for a few months and stumbled upon the man she vowed to spend her life with.

So, her life as she knew it began. They had laughed together. She cried when she lost a loved one. They had three beautiful children and shared a home. They were blessed. So why, was she so unhappy? Why did she feel the need to live in an imaginary world and create her own love story?

Years passed and her children grew. She became further away from the girl she once knew. But, that morning, that very morning as she was running her errand, she saw the young, vivacious, flirtatious and beautiful girl she once was. Her heart skipped a beat. Butterflies, that she thought had long since died, came alive in her stomach and danced. Oh, how they danced. She saw the boy she had once desired from afar. Only now, he was a man. He was climbing out of his car and walking towards her. He had not noticed her. For a moment, she thought of the fleeting glances they had shared once in a night club many years ago. She thought of the time he had asked her to meet him, but she ran scared because she couldn't stand another broken heart. She thought about all of the things she wanted to say to him right there and then and in that very moment his gaze lifted and she saw the glow of recognition.

Words stuck in her throat as their eyes met. She was grateful of the armour she had put on that day. She was grateful that she had chosen to wear heels so that she would look taller and slimmer. He raised his arm and waved; she weakly returned the gesture. Moving swiftly, he crossed the carpark and walked to her. He looked as handsome as ever. Wearing a blue t-shirt, she could see the muscles in his arms tense as he quickened his pace. She glanced briefly at his square jaw and his blue eyes that, unlike hers, had not lost their sparkle. She pulled at her hair and wrapped a strand around her fingers.

"Hello, stranger." he said as he stood in front of her.

He was tall. She had forgotten how tall. Words stuck in her throat as he tried to speak. All she could muster up was a weak hello and a smile.
That was all it took. As her teeth flashed, she felt the muscles in her face relax and she felt her eyes light up.

For five minutes, she was nineteen years old again and they spoke of the past. He spoke of his job, their mutual friends who had long since fallen away with the sands of time. He spoke fondly of his beautiful daughter and he spoke of his wife. She had left him five years ago. That was all he said and she didn't push him on the topic.

This was her chance. This was what she had always wanted. This was her epic love story right there, unfolding in front of her in the middle of a car park on a Monday afternoon. How many hearts would have to be broken for hers to finally be fixed? She thought of her empty bed. She thought of the arguments. She thought of the silence that engulfed them every night as they sat on opposite sides of the living room. Were these thoughts a selfish act? However, then she thought of her children and the loving life both her and her husband had provided for them. She recalled her wedding day and the gentle look he had given her has she walked alone down. She remembered the praise he had rained on her the day she stood and spoke at her mother's funeral. She was married. She had her husband. He was her love story.

He smiled down at her. Together, they exchanged more niceties before saying their goodbyes and parted. As he walked away to his car, her phone buzzed. It was a message from her husband reminding her to buy milk. A flicker of a smile crossed her face and she continued with her errands.

That evening, when her husband returned home from work, she told him that she had forgotten the milk. His cold eyes looked at her for a moment and she waited to be scolded for her small error. However, his gaze lingered and he didn't raise his voice. He was stopped in his tracks. For the first time in a long time, she was smiling at him. For the briefest of moments, he beheld in his sight, the woman who he married. He saw a spark in her eyes, one he had feared had long since been lost. He had missed this woman. He missed her at night when she told him to take the spare bed. He had almost forgotten what her smile looked like, but now he saw her again. She had come back to him.

"I'll make you a coffee," she suggested. "I hope you like it black."

He laughed, nodded and walked over to her. He grabbed her and wrapped his arms around her tight. She melted into his embrace and took in the scent of him.
He was her husband. And she loved him.

It wasn't about picking up a pen and writing her own passionate love story.

It was about leaving a line, starting a new paragraph and picking up where she left off.

You might lose the passion. The excitement might fade sometimes. But, don't ever lose yourselves. Be who you always were - dig deep and find yourself again.

That's your story to tell.

This story was interesting. Even though I wouldn't pick out this type of literature at the local book store, I thought it was good. I liked how you kept the identity of the character ambiguous so that the reader can put herself in the role of the protagonist. But it was sort of unclear, in a way, about the identity and the story in general. This might be because of the genre and stuff, like I said, but yeah.
Tweets by @thepenfactor