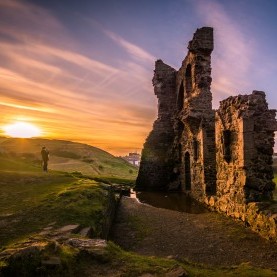 Donald Paul Maclaren discovers the true depth of love and its capacity to thrive beyond the grave.

When work ended at the distillery that evening Donald Paul Maclaren did not go straight home but, mindful of the special day it was, changed in the shed into his tweed suit with the knee-breeches and waistcoat. Tying his clothes up in a bundle with binding-yard and attaching it to the back of his Ariel motorcycle he drove up the six miles from Drochaid to Sheneval.

It was past six o’clock and the sun came slating at him over the peaks at the end of Strathfada, the ten-mile glen. It was bright in his eyes, so that he was forced to go slowly and sometimes shield his eye with his hand. He was a handsome man of middle height, more wiry than stocky, with dark hair and a moustache. His features were those a sculptor might have been glad to sculpt, for the bone-structure of the face was clear and fine, with a strong nose and full, finely-formed lips and symmetrical shapes to be found in cheek and chin and neck. His hair was black and thick and those eyes which many a lass in the glen found beauty in, were blue as the lochs under a summer sky. But perhaps it was not these outward shows that made him attractive to the opposite sex, not the inanimate beauty of him, but the deeper suggestion of vulnerability. There was something about him that was boyish and lost, something to mother, something that had made many women want to hold him. And there was a glint in his eye that was indicative just of humour, but of boyish derring-do. And though he did not work mainly out-of-doors like the farmer or shepherd, for he was a cask-maker and working in a large lean-to shed that was closed on three sides and only open to the elements on one, his face and neck and arms were almost as tanned as those of the hill-men, perhaps because he went about on his machine so much, and the wind tanned him, or perhaps because he spent as much or his leisure on the hill as he could.

Now he came into the first houses of the village and past the kirk and turned away over the humped bridge of the river, that led down across the haughs to the Big House. A hundred yard down he stopped the machine and climbed off it. He leant it against the stock-fence bounding the single-track road and hopped over the wire. He walked across the meadow, slowly, thoughtfully, making for a certain gap in the alders along the bank of the river. Here the river that came down through Strathfada, rising among the beinns at its wild and western end and debouching into the Moray Firth some fifty miles away, ran deep and swift and dangerous, especially after rain, even now when there had been a drought for over a month.

As he walked, head down, pensively, he cast his mind back, It was 1924. A light rain had been falling intermittently, then the sun had come out creating a rainbow of an unbelievable beauty. Perhaps it was the rainbow’s fault for he and Lady Craig had admired it and hadn’t seen Helen coming. Then the next thing they knew, she was running across the courtyards from the stables where they were, her hand up to her face. He ran down the stairs and followed her out into the main drive, but he had been too late to stop her taking the Packard. His heart sank as he watched her start it, drive it away with a screech of breaks. He knew she couldn’t handle it yet. He ran down the drive after her, shouting at the top of his lungs, but it was no use. Sick inside, he watched her take the corner into the bridge road, demolishing the stout fence-prop as she did so.

By now the car was weaving from side to side, banging into the fence on both sides of the road until suddenly it cut through the fence and across the haughs, throwing up a shower of mud as it went. He stopped and watched, in fascinated horror, as his wife drove the Laird’s new car through the gap in the alders and plunged into the river.
He was the first on the scene, some two or three minutes later, but by this time there was no sight of either car or passenger. The car must have sunk like a stone, for it had a heavy steel chassis and very little in the way of air pockets. But what about Helen?

He ran down the bank, wondering if the current had carried her down, the he decided the best thing he could do was to five for her near the spot when the car had gone into the water. He dived repeatedly as people – villagers and estate workers ran up from all sides. Soon the smart grey breeches and white shirt he wore in summer as the Laird’s chauffeur, were a mass of slimy mud. Then he fainted, he remembered and came to with a circle of faces above him, dad, sympathetic faces, and he guessed she had ben found. They took him down to the spot, two hundred yards downstream where they had laid her on the bank. She was quite dead. Someone had closed her eyes and that fine, ash-blonde hair he had so often kissed lay like seaweed across her face. For a moment he howled like an animal, then he collected himself, got up, carried the body in his arms all the way to the house.

For many hours he sat next to her in the front room, unwilling to leave her, then Doctor Forbes came and gave him something that brought the release of sleep. Afterwards Doctor Frobes comforted him: it had not been a painful death, he said. The bruise on her forehead showed it. She had hit her head on the windscreen when the car entered the river and had known absolutely nothing.