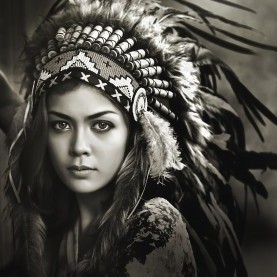 A Burmese woman's hair is a symbol of beauty, vanity and even dignity.

Grandpa Charlie had not been very well and we were all expecting the worst.

I was told he had gone downhill fast and that I should go and see him before it was too late.

When I got to Grandpa Charlie’s house, he was lying on the bed, feeble but alert and holding an old faded photograph. I sat on the bed next to his head and noticed it was a photograph of a young beautiful Asian girl with lovely long thick black hair.

I was thankful that insanity was not contagious but worried that it might be hereditary. Then I realized he must be hallucinating. I am told that does happen when you see a light at the end of the tunnel and you head towards it.

‘When I was in Burma,’ he started, [Grandpa Charlie was in the Second World War and was a BQMS – Battery Quartermaster Sergeant in the 42nd Division].

‘When I was in Burma’, he repeated, ‘we had finished our act of service and were about to move to Rangoon. I saw an old lady scrounging around for left over scraps to eat. We had enough food to get us to Rangoon where we would pick up more supplies. I took the excess and called the head man of the village and told him to tell the old lady not to worry as I was sending all this food for her and the rest of the villagers.

Just before we left, the head man came to see and said, ‘the old lady wants you to come to the village so she can thank you.’ I followed him to her hut.

She came out with folded hands and her head bowed. She thanked me in her pigeon English and called to someone inside the hut.

From the hut emerged one of the most beautiful girls I had ever seen. She was the old lady’s granddaughter. She had the longest, thickest and blackest hair with eyes the size of dark full moons.

The old lady indicated to me that in return for all the food she would like me to have the pleasure of her granddaughter’s company. Being an officer and a gentleman I thanked her but refused saying it was not necessary.

I said it was getting late and we had to leave. The granddaughter started to cry. She asked me to wait. She went into the hut and was there for a while. I started to say goodbye to the other villagers when the grandmother emerged and said, ‘please wait as my granddaughter wants to give you something.’

The girl came out of the hut and there in her outstretched arms was all her lovely long black hair.

‘She has cut off her hair as a symbol of her gratitude for you, she will not associate with another man till her hair has grown to the same length again.

I was speechless. I knew how important hair was to a Burmese woman. It is a symbol of beauty, vanity and even dignity. They never cut their hair.

I carried the hair back to the camp and showed it to all the West African soldiers. They also knew the significance of the hair. They passed it around slowly, looking at it, feeling it, marveling at its symbolism. Then one of them held the hair in both his hands and raised it above his head so that everyone could see it and he shouted, ‘Quartermaster’s Juju!’ [A Juju is the most powerful accessory to a West African soldier. It is something that symbolizes their power, their ‘mojo’. Many of them have black threads tied around their arms with a little container attached to it in which they keep their ‘Juju’.]

I carried my Juju with me for many days. It smelt of lovely sweet oil. I wrapped it in a towel in an attempt to keep the sweet smell alive. Eventually when I could carry it with me no longer, I took it to the forest [she had been born in a forest] and I put a match to it and watched it burn and smelt the sweet smell it emitted as the flames from it rose higher and higher.

'Today I don’t have my Juju but I can still feel the power.

A day later Grandpa Charlie died and I repeated that story at his funeral. There was not a dry eye in the house. More power to you Grandpa Charlie as I know your Juju is with you still.