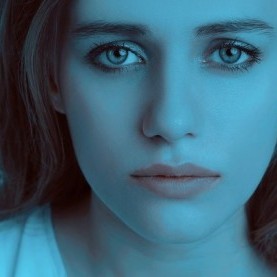 A mum of three kids is struggling with postpartum anxiety. She refuses to get help, thinking no one can help her and the story continues from there where she ends up having no choice but to face her fears, the things that are causing her anxiety and has caused it before she was even pregnant. With each child her anxiety became worse. What you're reading is the prologue.

She looks at herself in the bathroom mirror. Stripped bare, physically and mentally. The days building up on her until she is all but broken. She stares as she picks at everything about herself she doesn’t like. Or rather, the voice in her head tells her she shouldn't like. Tells her she should have done better to avoid looking the way she does. It says she is lazy, that she should make more time to make more effort. Put on makeup every day like she used to, paint her nails like she used to, have soft skin like the used to. Before the kids, those things were much easier…

She continues to stare at herself. Her long chocolate brown hair, flat... dry but oily. Not been washed for days. Her face, pale and broken out - half stress and half hormones running amok. Her lips cracked and dry, she keeps forgetting to keep hydrated, everyone else comes first. Her breasts once perky, hang a little lower than they once did. Currently engorged and sore, she’s leaking on the bathroom floor.

Her stretch marks grew more with each pregnancy, some still red, purple and dark, others clear but still felt if she ran her fingers over them.

Her stomach is flabby, bloated, wobbles in ways it never used to.

She moves closer towards the mirror and leans in close, face to face with herself.

She sees her watery and red eyes, they’re sore from all the tears she has shed today; like most days lately. The voice tells her it’s all her fault. That she should be better. That she shouldn’t be crying. Should have washed her hair, should have moisturised more to avoid those stretch marks, should exercise more to get rid of that belly. That voice tells her she’s a bad mother for letting her kids have too much sugar, for watching too much TV, for not taking them outside as much as she should.

She opens the shower door and reaches for the hot tap first. Nothing more soothing than water so hot it almost burns you. She turns it up high then follows up with some cold water. She waits for a moment, turns on the exhaust fan and steps inside. Once inside she feels as though she is cocooned. Away from everything for a moment. She can recharge. The water falls so nicely on her brown hair, finally getting the clean it needed. The water falls down the back of her neck, over her shoulders and down her arms that are wrapped around herself in a hug. The water continues to fall over the rest over her body, her ass that she had always been proud of. And still is. The only part of her body that the voice seems to allow her to like. Her kids are in the other room with their dad and don't seem to be wandering in, she can’t hear the baby crying either and so she let's go.

She feels all she has to feel to be able to let it out so she can keep going. She silently wails as she let's the tears flow all the while holding herself tight, as if letting go of herself, everything else around her would tumble too. She feels the deep loneliness, not wanting to truly let go and reach out to those around her; she doesn’t want to be a burden. Often told by her husband, her pride is a bad trait of hers.

She lets herself feel the sadness... the loneliness... the worry... the voice telling her she's insane as she quietly looks up to heaven and speaks to her grandad who had passed, such a connection they had when he was alive, she knows he would listen, hold her and not let go until she said so. Making some wise comments to cheer her up. He would say lift your head, my little doll.

A thought crosses her mind, just a moment of weakness, that rarely happens these days. Not since she found the love of her life and had three beautiful kids. The voice tells her she's too weak and that she won't ever get better. No one will find a cure for her, not one that actually works. And just for a moment, she fears she doesn't have the strength to carry on. She's tired of fighting. Tired of hurting. But here's the thing - that voice has power over her for everything else except this. Nothing. Not ever. Could take her away from the four loves of her life. Nothing. So she keeps on fighting. She finds renewed strength in that steaming hot shower. She wipes away her tears, holds her head up and turns off the shower. She takes a deep breath and steps out. Feeling the cold of winter as she does. Before she reaches for the towel, she looks at herself in the mirror. And things look different…

Her hair looking better than it did before. Her stretch marks less noticeable. Her boobs still perky enough to make her happy. Her face isn’t as broken out as she thought it was before. Her ass looks great. She has power over the voice, and it knows it. It’s left her, for now. She wraps herself in a warm towel; a little trick she does to make her feel nice and toasty after a shower in winter.

Her little girl runs in calling her name, “Mumma! Mumma!” She holds her hands up for a hug. Her wavy brown hair all over the place, she’s obviously been having fun with her brother and her dad. “Hug Mumma! Hug!” She smiles and says, “hi baby girl,” she picks her up and holds her tight. She kisses her head as the little girl giggles, she smells her hair and her heart feels full. She knows she can get through this, for her husband and her kids. For she will always, always keep fighting, for them.

“Muuuuummmmm,” she hears from the other room, followed by the usual pitter patter of her little boy’s feet. “Honey? Are you in there?” She hears her husband yelling for her. “In the bathroom, babe.” She yells back, her voice still cracking a little. “Brody has done it again!” he yells to me as he walks in. She can smell the baby from a mile away. “mummy, mummy!” her little girl shakes her legs to let her know she wants to get down. “she touched my toys!! Again!!” her little boy yells when he finally reaches her in the bathroom. “No I didn’t!” her girl yells as she shoves her brother. “come on guys, be nice to each other, hey,” she speaks in a gentle tone when she can, growing up in a house filled with yelling, she wants different for her kids. The crying of a very thirsty baby begins, so desperate, so sad – like he hasn’t been fed for a day, even though her sore, cracked and bleeding nipples tell her that’s not true. The kids keep yelling and shoving, and her husband walks in, “we’re out of bread babe, I’ve got to go down the street.” She sighs. A feeling in her chest, it’s building… getting stronger. Tighter. She’s feeling overwhelmed. The baby continues to cry, as her husband runs down the street to get what they need. The kids continue to shout. She yells out to her husband, “babe!” he yells back, “yeah, hun?” he was just about to close the front door after him. “Coffee! I need it!” she hears the smile in his voice as he replies. “way ahead of you,” he knows her so well. She takes in a deep breath, ready to tackle the chaos that is her life now.

Despite all of this chaos, there's one question that sticks in her mind… She loves her life. She loves her kids, her husband, her town, her friends... So why is this voice in her head, why does her chest feel so tight, and why does she worry about everything, all the time? Why does she spiral like this? More so with each child she has had?

…Because anxiety is a bitch.