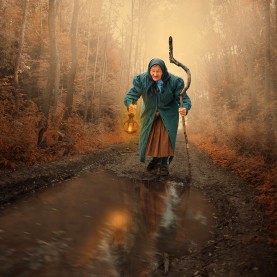 Part of a novel where chapters can be read as stand alone shorts.

You just want to be happy.

Sheltered beneath the carport from the fat snowflakes turning the sky from pitchy black to a polish of corpse-gray, You and Una smoke silently, in silence. The vertical overlay of snow, it envelops sound, or keeps it out, maybe it keeps it in—who knows—brings it into its arms and absorbs it like a sponge.

You want to tell her this, You want the words to slice through the night and the quiet, to say, I want to be happy. Like, the way everyone else seems to be, I think.

But of course, You don't. Don't want to explain it. Don't want to have to. Not sure You even can, so You just keep staring down the street, now a width of perfectly lain snow reflecting the yellow spots of the street lights.

Una, she's crouched, sitting on her heels. She's wearing Your old red robe You gave her not long after meeting. Something like eight years ago. It drapes over her loosely, pools around her feet in a circle the color of spilled wine. And for a moment You wonder if You mean the robe or the years. Decide it doesn't matter. She has the robe pulled in tight about her chest, clasped shut with a lock of five fingers; and she's throwing her stare somewhere out there, through the snow, through the night, past it.

Instead, You tell her about the tooth.

That makes two in three months, You say.

And another will probably need pulled soon, You say.

The words are pushed out of Your mouth, drift into the air with a puff of smoke that rolls over Your shoulder like mountain fog.

I'm disintegrating, You say and turn around.

Her cigarette burns like a firefly, illuminates her face for a blink, and then flashes back into the gray dark. Disappears.

I'm sorry, You say, just like that. Because You know, at the very least if not disgusting, You can imagine that it must be a little embarrassing being married to a thirty-seven year old losing teeth.

You go to say something else, but manage only to keep tonguing the edges of the newly broken tooth, feeling the serrated edge, the littering of bone-fragments You've been trying to excavate for more than a day now. Your cigarette, it chokes on time, coughs in the cold, dims and expires.
The spark of Your Zippo, in the bright flash of sudden flame, it brings Una back to the surface of things. Her pale skin hangs disassociatively. Looks like an Illusion. Feels like a Delusion.

But You know it doesn't matter. Not really.

For whether the loss of one tooth or a whole mouthful, there is just too much to say there is nothing to really say at all.