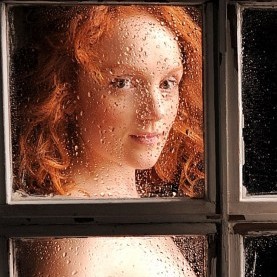 Uninspired by her surroundings, a mysterious passageway leads her to something wonderful.

Her flat was bare and far too hot. She’d moved in only last week, yet she felt as if she’d been there an eternity, rubbing uncomfortably against the hard angles of the place as she made her feeble attempts to work. Every morning she came to sit at the dining table with her laptop and a soggy bowl of cereal, stony silence facing her. She held her laptop like third arm, working in the daytime, watching inane television in the evening. She would stare at the grey screen until the grey screen stared back, asking: ‘are you still watching?’. The white square of a room was empty save for a bed, a dining table and a solitary armchair, sitting wanly beside an ornate fireplace which had been boarded up, presumably by previous tenants. Though sweat trickled down her brow at the mere thought of heating the room any further, she wondered if perhaps the fire might be a welcome addition in the wintertime. Before moving in, the landlord had assured that a full heating system had been fitted. She hadn’t realised that ‘a full heating system’ constituted a small electric heater, which, when she’d switched it on to see how effective it was, it made the room smell strongly of burnt plastic. It was this smell, which she was still slowly steeping in, which led her to the idea of lighting a fire, prompting her to attempt to remove the particle board which had been shoved roughly into the gaping mouth of the fireplace. After a few sharp tugs the boards gave way, shattering the silence as they clattered to the ground.

The sight before her eyes wasn’t unlike what could be expected from a fireplace. That is to say, she found herself face-to-face with a dark and dusty hole. She peered upwards into it and was surprised to find nothing but a wall of bricks through which not even a particle of smoke could escape. Craning her neck for a better look, she noticed that, though the ceiling of the chimney was made of impenetrable brick, the back wall wasn’t. It was flimsy and peppered with tiny veins of light. Pushing gently, the material gave way, and she found herself looking at another room, the mirror image of her own, but brimming with soft and colourful. Every coffee table, armchair and countertop was covered in pillows of all colours. On the left wall hung a heavy purple curtain, which she assumed hid the door. Soft sunlight drenched the room, as if filtering through light net curtains. Despite this impression, she failed to find a window anywhere in from which this light could be coming. This room, this apartment, seemed to be some kind of oasis from reality. It certainly didn’t belong in a dilapidated block of flats, presided over by a landlord who collected the rent-money in cash. She imagined she’d somehow managed to crawl into her neighbour’s apartment. The laws of physics certainly backed this theory. Yet she didn’t think her neighbour, a sleazy-looking businessman who leered at her whenever they ran into each other, would be into this kind of decor. It was upon recollecting one particular incident, when he’d wolf-whistled as she’d left her apartment in a fairly tight dress, that it occurred to her that meeting him again while crouching in his fireplace was perhaps not ideal. Despite this, she couldn’t bear to leave the vanilla-infused room to return to hers, which, though unbearably hot, left her strangely cold and empty. She decided that the marginally less demeaning scenario would be to actually be inside his apartment, as opposed to peering into it with soot smeared all over her face. She crawled through the hole, dragging the laptop she was still clutching behind her. Her eyes snagged on a bed in the corner of the room. Despite the chaotic comfort of the rest of the apartment, it stood, white and empty, framed only by a halo of light. It was so meticulously arranged that she was almost convinced she was in some kind of showroom, if her landlord’s business had been sufficiently legitimate for showrooms, or if the rest of the room hadn’t been coated in the signs of human habitation. It looked like a cardboard cut-out, but was soft, she found, gently lowering herself onto it to stare up at the light-freckled ceiling.

It was some time later, when she finally woke up, that she realised she’d fallen asleep. Reluctantly, she resurrected herself from the bed to check the time on her laptop, which was sitting forlornly in the pile of soot she’d dragged in with it a moment ago. No battery. There was no charger in the room, nor for that matter any outlets. As much as she’d enjoyed her visit, she should probably take this opportunity to return - it wasn’t advisable to make a habit of sleeping in other people’s homes like some kind of overgrown Goldilocks. She pushed the laptop into the tunnel and gingerly followed it on her hands and knees, feeling sorry for herself for living in a room she’d made no effort to make a home.

That night, after three hours trying desperately to sleep, she returned to the home next door. Terrified she’d be caught by its owner, she had sat in the little passageway, listening. Hearing nothing, she pushed down the planks she’d meticulously replaced only hours before and crawled into the delightfully empty bed. Although upon waking she formed the honest intention of joining her laptop in the other room, it had somehow instead ended up joining her in this new one, and she spent the day working peacefully in an armchair. For the next week, she found herself in and out of (though admittedly mostly in) the mysterious apartment, with only the smallest fear of absent inhabitant’s return. It was only after a week, returning from a toilet trip in her own apartment (she felt uneasy using the bathroom) that she heard a noise in the room. From behind the heavy curtain came a soft scratching noise, like a key in a lock. She shoved herself clumsily back through the hole, returning breathlessly, but successfully back to her apartment.

For several weeks, she had enough shame not to return. She spent days sat stupidly in front of her laptop, waiting for the heat, or the smell, or the loneliness to dissipate from her apartment. It was on one of these indistinguishable days, sitting at her table attempting to rouse herself with coffee, that she smelt fire. A flood of smoke seeped through the cracks in the boarded-up fireplace. She’d spent enough time next door to know by now that mostly there was nobody home. Clearly, she was duty-bound to save the home from cremation. She found herself knelt at the fireplace, dislodging the planks with an eagerness which couldn’t entirely be attributed to neighbourly concern. It never occurred to her that whoever lived next door may have decided to light a fire in what they thought was a fireplace. Fortunately, the tunnel was empty as usual and she crawled through with ease.

Despite her persuasion that the room had been ablaze, she couldn’t even find the smallest whisp of smoke that would confirm the evidence previously before her eyes. Nonetheless, she thought she should check the kitchenette before she left. She found, to her surprise, that the oven was on and full of fat round biscuits, already golden brown. Donning a pair of pink oven gloves, she set the tray to rest on the small wooden table, and noticed a bowl of freshly whipped buttercream beside her. Taking a biscuit with one hand, and a spatula full of the icing with the other, she roughly covered the biscuit and shoved half of it into her mouth. There was a shuffling sound and she turned around to see the heavy purple curtain on the wall behind her twitching. Eyes wide, she stood ready to leap back through the hole, which now seemed to her to be uncomfortably small (perhaps she’d eaten too much buttercream), when at the base of the curtain appeared a white kitten. She had thought she was mortally allergic to cats – at any rate, she certainly had been. The kitten gave a soft mewl, and lept onto the armchair facing the defunct fireplace, from where it stared at her enticingly, as if begging her to join it. She did, thinking how pleasant it would be to fall asleep with a cat in her lap, happily concluding that her allergies had simply chosen to dematerialize at some point in the last six months.

She woke up to the feeling of a pleasant tingly warmth, which began at her toes, then radiated gently throughout her entire body. She opened her eyes slowly, briefly confused as to where she was. She found herself in a large and comfortable armchair, a cat in one arm and a biscuit in the other. A fire blazed merrily in the ornate fireplace in front of her. Ah, yes. Home.