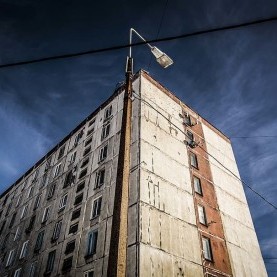 The story of a morning where a patient suffering from anxiety finds the answers at the doorsteps of a doctor.

If I tell you to sit in a corner and not think about an orange penguin, that would be all that you will think about.

Same with anxiety—the more you don’t want to think about it, the faster it envelopes you.

Which is why I was sitting in the waiting area of Dr. Harvey Brown, MSc, MBACP. I had spent the last night perched at the end of my bed, still dressed from work. I had had minor panic attacks earlier, but always ignored them with the excuse of being overworked. But after last night, it couldn’t be pushed any longer. In the early hours of the morning, I took action before it was too late. I searched online and decided on the first name I came across. In my haste, I reached the address even before it was opening time; a matronly receptionist was bustling about preparing for the day before the doctor arrived. After I had spent about fifteen minutes fidgeting with my scarf, Mrs. Shaw - the receptionist, ushered me inside the doctor’s office.

“Oh, dear! You look positively ghastly. Why don’t you just wait in the doctor’s chambers? I’ll send him around as soon as he’s in. I’m going to get myself a coffee; would you like some, dear?”

After politely declining the offer, I stepped in to the office. The thing that struck me as odd was that there was no desk in there. One wall was completely glass, displaying a splendid London view. On the other end, there were two comfortable looking wing chairs facing each other with a small end-table having just enough space for two glasses of water. The rest of the room was bare. That is what you get when you don’t research properly—an eccentric psychologist. This was not helping my anxiety at all. The empty room filled me with a strange sense of isolation. Just as I was about to give up on my spontaneous decision to go seek help, the doctor entered.

His office was a perfect metaphor for his personality. His appearance signalled his affinity to minimalism. He was wearing an almost unnaturally white button-up short with sleeves rolled up. He looked fresh from shave and a haircut. He was sporting brown loafers without socks and his chinos were crisp and wrinkle-free. He stood uncertainly at the threshold.

“Hello, doctor. I’m Jennifer.” I stood up from the wing chair I had occupied to greet him. I could feel callouses in his hand. He took the chair opposite me. His uncertain demeanour was long gone. He crossed his legs and leant back in his chair.

“So, Jennifer. Let’s get cracking on, then! What brings you here this fine morning?”

I was taken aback with his direct approach. But what else do you expect from a doctor without an office desk? I began to uncover my history with anxiety. I spoke about the time when I ran back home from the supermarket after a shopper with a screaming toddler asked me if I knew where the butter was. There was another time when I had felt anxiety surreptitiously creeping up on me as I stood in front of 20 fifth-graders, teaching a math class. I had excused myself from the class and taken refuge in a washroom stall. I sat there for about an hour and a half before the walls started creeping in.

As I neared the end with last night’s episode, the now familiar feeling was fast escalating. I realized I was sitting on the edge of my chair, wringing my scarf into knots. The doctor must have sensed it too, because he suddenly got up from his chair. I stopped abruptly in the middle of my recounting.
He stood in front of me and held out an inviting hand.

“Come here with me. Let’s see if we can take care of this.”

I took his hand. He walked me to the wall-window, and we stood facing another building across the street.

“Look at the 23rd floor there.” He said, pointing to the opposite building.

I counted the floors and peered at the 23rd floor. It looked like an office with a person by the window who was working furiously on his computer.

“Do you see that man? The one with the blue shirt?”

“Let’s call him Gary. I want you to tell me his story.”

I didn’t nod this time.

“Yes. Imagine what his life is like. You could make up anything. You could give him a wife, a mistress, children… anything. Tell me who is Gary.”

Granted that this was my first visit to a psychologist, but this was not what I had expected. But I was here. I might as well give it a shot.

“Umm… Gary works as a business consultant at a firm. He’s… he’s worried about his kids starting college next year. He watches football a lot with friends… still hangs out with hia college friends on the weekend…”

I stammered to a halt. Doctor Harvey was looking at me expectantly.

“Go on. What else makes our Gary interesting?” His eyes were now shining with anticipation. For a moment, I forgot we were in a psychologist’s office. Were all psychologists this laid-back? Whatever it was, he was good at what he did. I resumed my narrative with renewed enthusiasm.

“Even though he has a nice, comfortable job, secretly he wants to be a writer. He wants to write about this alien who crash-landed on a weed farm and went on to become the drug lord. He always sleeps with his socks on and never gets up before the alarm clock, even if he has to lie in bed for half an hour. He once fell asleep on the tube and missed his stop, and since then he always travels standing on the tube. He has a scar on his forehead he claims he got in a fight with his elder brother, but he actually got that scar from when he fell and hit a boulder when a hen was chasing him around his uncle’s farm. Right now, he’s involved in a high stakes corporate espionage and he’s sending sensitive documents to this rival company. He’s trying to finish his mission before his boss comes to work!”

Doctor Harvey was looking at me with a strange mix of adulation and disorientation. Slowly, his face cracked into a smile. He clapped his hands together in excitement.

“Oh, what a day Gary will have! So, coming back to your anxiety…”

I realized that the anxiety that had kept me rooted to the foot of my bed last night had completely left my system without me realizing it. Gary’s secret life had left no room for it in my mind. Doctor Harvey was smiling even more broadly now, reading the shocked expression on my face.

“This is the most fun way you can get rid of anxiety. I have myself indulged in this time to time. Very effective and immediate relief. Sometimes, it doesn’t even have to be a person. My neighbour’s dog does just as good!”

The psychologists in the movies always seem so stiff and complex. This was as far from the stereotype as possible, although I wasn’t sure if it is a common practice for psychologists to be this open about themselves with their patients. His methods could be questioned, but the result was good enough for me. At least now I won’t be groping blindly the next time anxiety descended. I had a way to find the way out. This fortuitous encounter with the good doctor was perhaps just what I needed.

“Thank you, doctor. You have been really helpful!” I meant every word.

I laughed - the same Jennifer that was about to bolt from the office half an hour back.

“That’s not necessary, Jennifer. I just need to prepare for my next patient.” He said, turning his back to me to face the glass wall.

I thanked the doctor again and exited the room. A faint smile still lingered, thanks to Gary and his adventures. Mrs. Shaw was sitting at her desk with a half-empty cup of coffee resting near her elbow.

She looked at me with sparkling eyes.

“You look awfully different from how you came in. Looks like you won’t need to see the doctor after all!”

My smile faltered a little as confusion seeped in.

“What do you mean?” I asked tentatively.

“He just gave me a ring. Doctor Harvey got held up somewhere. He asked me to apologize on his behalf for any inconvenience. Awfully nice chap, Doctor Harvey. Luckily, we had just two patients for today—you and another poor soul for schizophrenia. That reminds me, he should’ve been here by now. I better check on him… ”