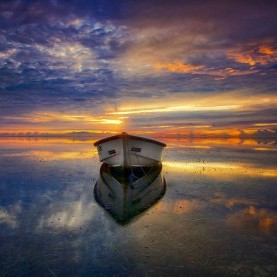 This is the first chapter and beginning of the second chapter of my first book. I have an idea as to how I want it to go, but I really want to make sure the pacing is right. The story is about a couple that seems to have a perfect life in the Midwest when something goes terribly awry and Laura Buckman’s life changes forever.

The sun hung low in the sky, slowly disappearing behind the horizon. The sun set at almost nine o’clock at night now, the air is always hot and sticky, and the limited amount of trees and hills by the lake made for an unforgettable scene. Laura sat quietly on her back porch, watching the pinkish-orange sky turn purple, blue, and black. She wondered what Diana was doing back in the house. It was getting late and neither of them had had dinner yet. They promised to eat dinner while they watched the sunset, and Diana had promised to cook. It was date night and they wanted to do something chill.

Laura had lit candles and set the table outside and waited for Diana who said the food would be ready shortly. Now Laura was waiting and wondering, “it’s been five minutes, I hope she’s okay.” Just as Laura decided to go help Diana, she appeared holding several dishes and begging Laura to open the door.

Laura opened the door and took three dishes from Diana. “Holy cow! How did you think you could do this yourself?!? Also, babe, how many courses did you cook??”

“It’s only three! And I left dessert in the fridge.” Dina said, trying to plead her case for the many dishes of food she brought.

They placed the dishes and sat down. “You almost missed the whole sunset babe, look at all the colors!” Said Laura.

They sat in silence, eating their meal and watching as the last sliver of the sun dipped behind the small hill at the edge of their property.

Diana suddenly blurts out, “oh! Did I tell you what we’re eating, love?”

“Well, we were eating the soup first, obviously, but that is a turkey sausage and vegetable cream based soup! I made the recipe myself, but it’s not too rich and not too creamy, right?”

“Thank you my love.” Diana says, her cheeks turning pink as she looks down at her soup to finish it. Diana loves getting complimented, but never really got complimented as a child. Laura knows about Diana’s troubling past and has helped her through so much that they eventually fell for one another.


Once they finish their dinner, Laura blows out the candles and they head back into the house to do the dishes. To Laura’s surprise, part of what took Diana so long to bring the food out (other than carrying what felt like a million plates) is that she also did the dishes from cooking the meal. Laura insisted she finish the dishes, they kissed, and Diana went to get ready for bed.

When Laura was done she also went to get ready for bed. They snuggled up under the covers on their queen sized bed, turned on the tv to whatever late show was on, and drifted to sleep.


After waking, Diana and Laura brushed their teeth together, got dressed together, and made and had their first coffee of the day together. They were very close, and loved to do what they could with one another. They made and ate their breakfasts, Diana eating toaster waffles with strawberries and Laura eating Cheerio’s with bananas and a sprinkle of sugar.

They both cleaned up their breakfast, filled their to-go mugs with coffee, kissed, and went to work. Both of them teachers, but working at different schools, in different districts. This meant that their breaks didn’t always perfectly align. Because of this, Diana had planned to do something special for Laura that afternoon as they had a half-day at her school that day. She arrived home not long after lunch and began prepping the house for the surprise!


Laura came home from work, knowing Diana had a half day and would be home. She saw Diana’s car in the driveway and parked next to it like usual. She gathered her things, turned off the ignition, and got out of her car. She walked up to the house, noticing the door was slightly open. Laura thought this was odd since they usually kept the door locked, even if they were home.

She opened the door and saw rose petals strewed about along a path that was guided by battery powered tea light candles. She had wondered if Diana left the door open on purpose, to speed up the process of Laura coming home. Laura set her stuff down, ecstatic, and followed the trail of roses to the kitchen. As she did this she thought “this is it! She’s gonna propose! I can’t wait to marry her!”

The moment Laura entered the kitchen, her life changed forever.

She saw Diana. Lifeless. Face down on a pile of rose petals soaked in blood just as red as the roses. An open box in her right hand that looked like it once contained a ring. Finally, she noticed the back door open, a few petals leading out the back door and a bloody handprint on the handle. She heard a car door slam. Then the ignition, then it screeched off.

Laura fell to the floor and sobbed. She crawled over to Diana. Her hands getting soaked in the blood on the floor. She picked Diana up and laid her head on her lap. Laura stroked Diana’s face, tears streaming out of her eyes onto Diana’s cheeks. She looked to see where the blood came from and saw a knife barley hanging out of Diana’s abdomen. Laura struggled to get her phone out of her pocket. She couldn’t function, she couldn’t see through the streams of tears now pouring from her eyes, but she managed to get her phone open and punch in “9-1-1.”

She told them what she could, through sobs, and eventually the paramedics came. They lifted her off the ground and took her away. Laura couldn’t look as they did it, and she couldn’t let go. She didn’t want Diana to die. She wanted to get married. Build a life with her. The paramedics pried Diana away from Laura, onto the stretcher, and into the ambulance. As Laura climbed into the ambulance she was instructed out almost immediately by police officers. They wanted to question her. Laura fell back to the ground. This time she was out of tears, but sobbing all the same. She couldn’t speak, the police tried to calm her down, but Laura was a wreck.

“I just need to know if she’s okay…” Laura managed to whisper. “I need her to be okay… she is my life…”