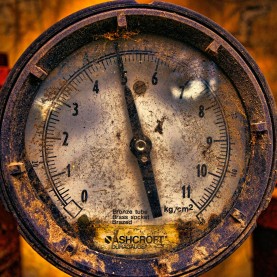 A story about a broken Buddha statue and a runaway cat, but mainly about choosing life over all other distractions.

The cat was black and had three hobbies: sitting on the piano without moving, ominously staring from a corner behind the glass door, or trying to communicate some strange prophecy. But now she was nowhere to be seen- in fact I hadn’t seen her since morning. Tally stretched her legs and told me,

“I owe my sister a Buddha.”

“Why? Did you interrupt her seconds before she reached Zen?”

“No, no, nothing like that. I just broke her Buddha statue.”

“Smashed it?”
“It was an accident.” She made a curt motion with her hand as if to convince me.

“Did you try telling her it was the statue’s time to break?”

“No. Will it work? I was thinking about replacing it with a cheaper, similar one before she noticed.”

“That’s a far better plan.” There was a moment of silence.

“I was supposed to be looking after it. I’ve put some wet food in her bowl but she hasn’t eaten it.”

“Maybe she’s sick?” She was an old cat- eighteen human years of age, eighty-eight in cat years.
“No,” I said, “actually I don’t think she’s here.” We looked aimlessly around the house, and even checked the garden where she usually slept, curled up in the laundry basket. Then the landline rang. A distant, monotonous beep. I got out into the hall where the phone was and picked it up.

“Hello, it’s me,” said a young voice. It was the student. “The cat’s here again. Could you come pick it up? It’s eyeing the chicken.”

“Damn it! We were just wondering where she’s run off to. Alright, I’ll be right there.”
“No worries.”

“Alright. Mystery solved.” I hung up, and turned to Tally. “You’re in luck,” I said.

“Cat’s gone over to the monk’s place. Terrorising the chicken. C’mon, maybe you can get a Buddha from him instead of the flea market.”

We went out through the backdoor, and crossed the shared fence between the old welsh house and the place where the monk lived. The monk was an old man, and the student was in his thirties. He had been studying for a few years, but as far as I knew had yet to be ordained. The weather was good. Their house was freshly painted, the wooden meditation shed at the bottom of the garden, where wild garlic grew, and the fence where the chicken were, clucking and running around, laying too many eggs. The monk always gave me eggs- he would cross the fence and hand me fresh eggs. He didn’t know what to do with them, he said, there was a limit to how many eggs a man can consume. We knocked on the door. The student opened it and smiled.

“Will you have tea with us?” He asked.

The fuss blew over, we sat on the floor. Orange peels were burning over a recently put out fire, smoke came from the corner, the strong scent of early spring. The monk made his appearance after a while, carrying a tray. A teapot with white lines across it, four teacups, a plate with sugar cubes. He set it down and the sincere smell of green china tea reached me. I took my cup and plopped a sugar cub in. I watched it dissolve. We had tea in relative silence- snippets of conversation broke through the surface but not for long. The monk seemed tired. The student told us about how he can’t take photographs anymore, because he gets way too into it, and then starts seeing everything as something to be photographed, like everything’s in a frame, waiting to be snapped. He hadn’t taken a photograph in ten years, because it made him obsessed. I yawned. What was it, I thought, to chose life? Especially over these obsessions.

“I just don’t experience anything,” the student said. “Any moment or anything. It all starts looking like a photograph. When I was a teenager I thought that’s what I was going to do forever. But then I stopped, ‘cause it was taking over everything.”

“Oh,” the monk said, “I almost forgot. I have eggs for you again.” He gave me fresh eggs in an empty carton. I thanked him. We had all finished our tea, only green remnants swirled in our cups now.

We walked down to fetch the cat, all four of us, through the garden and down at the corner, where the chicken were. A little wooden shed was there, with the door half-open. I saw the black cat’s shape, laying, asleep. The student was still talking about photographs as if they were some curious drug, and how he can hardly snap them with his phone. I could hear Tally’s mumbling responses behind me, her voice had emerged with the background noises. Chicken. A train passing by in the distance. Trees. Wind amongst wild garlic. I walked in the shed. The cat was snoring lightly. I tapped her nose and picked her up. It was stuck in my head. What was it to chose anything, really, life or spirt, over these obsessions? And what was the choice? Outside, everybody was smiling.

“Hey, what about the thing?” Tally asked me.

“Yea,” I said. I turned to the two men. “Listen, Tally here broke her sister’s Buddha statue and I was wondering if you have a spare one…”

“It was silver,” Tally said, “about yay-small.”

“Maybe it was time for it to break,” the monk said.

“Come inside and pick one,” the student said. They went in the shed and emerged again. Tally was holding a little silver statue of a Buddha with a spot for a candle on his crossed legs.

The cat jumped out of my arms and landed swiftly on the ground- a fast motion. She usually moved slow, heavy and tired. She mewed. Every morning, the rooster would cry out and wake us up, and keep crying out- a little past six, until the rays of the sun filled the hills, the tops of trees and the chimneys of our houses. The cat was looking at him- her imminent death, the prevention of days, perhaps she’d figured that the rooster was a closer target than the sun. Or maybe she thought that he was the enemy- entirely responsible for the passing of time- and if she snapped his neck the sun wouldn’t rise again, and she’d live forever. Strange life filled her. The hair was standing across her back, she looked at him with great hatred. For a moment, I thought she’d jump high and land on the inside of the fence, and kill him at once. The nails had come out of her paws. Her little face had wrinkled into great focus. I nearly saw it, the blood sprinkling out of its feathered neck, and his head bending in an odd angle. Then, she saw the fence was too high. Her once perfect black fur looked reddish in the dying sun. She wagged her tail and began limping home. Her thin figure, slowly reaching the shared fence, across the house where the kitchen lights were on, and her food waited for her, splashed into her bowl.